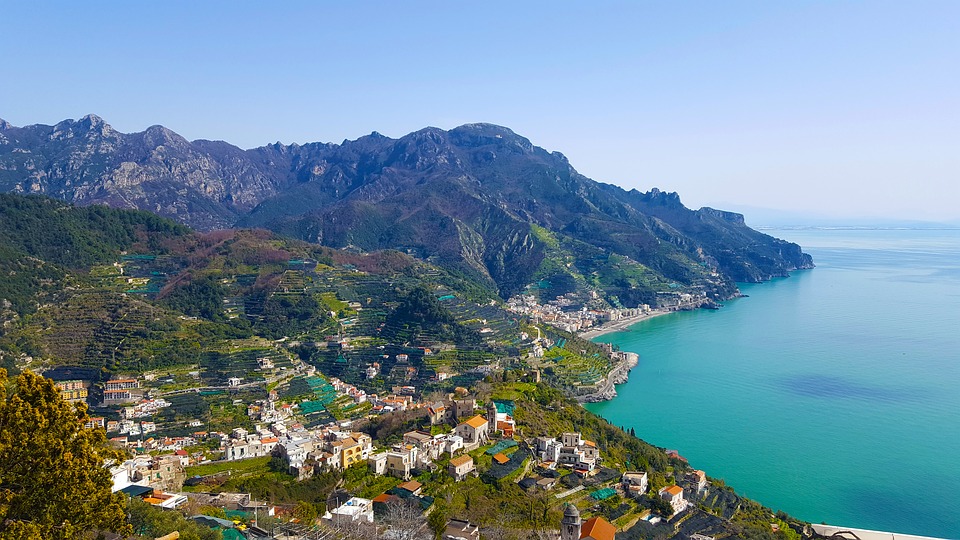 Overlooking the Tyrrhenian Sea, the Amalfi Coast has 13 towns stretching from Sorrento to Salerno on the southern coast of the Salerno Gulf in Southern Italy.

The scenic SS 163 road connects all the towns along one of the most beautiful coastlines of Europe where you can gaze out to panoramic views of steep cliffs, beautiful beaches and bays, traditional fishing and cliffside villages, and mountains that were terraced centuries ago for cultivating lemons, olives and vineyards.

Hikers and nature lovers trek the old mule tracks and footpaths that were once used by farmers, shepherds and fishermen to enjoy stunning views in tranquil settings. 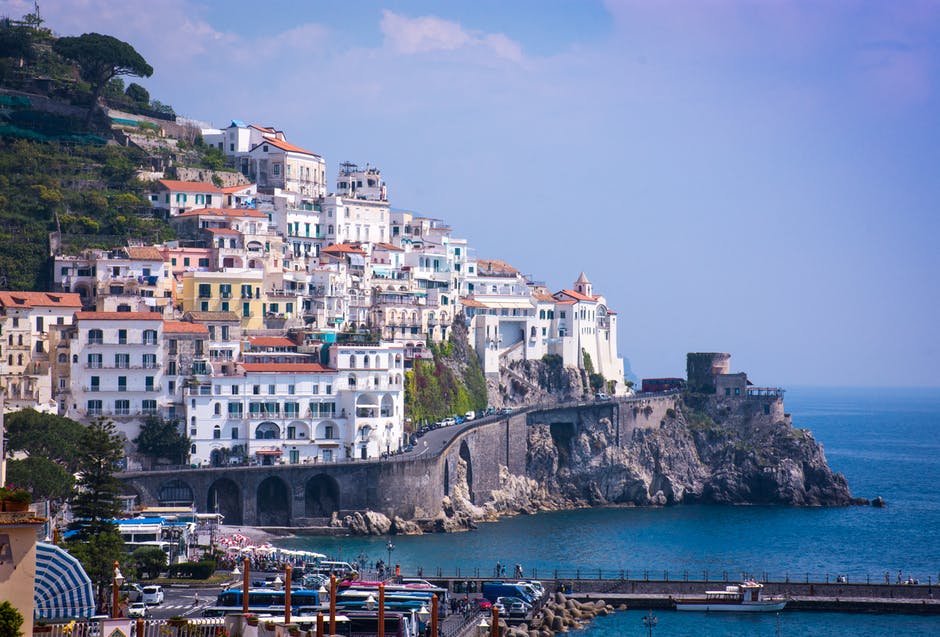 Surrounded by cliffs and overlooking the Bay of Salerno, Amalfi is the main town of the coast in the region of Campania.

Founded in the 9th century, it rivaled Genoa and Pisa for military power and during the medieval period, Amalfi was famous for its schools of law and mathematics.

Amalfi Cathedral (Cattedrale di Sant'Andrea) is a 9th century Roman Catholic cathedral in the Piazza del Duomo dedicated to the Apostle Saint Andrew whose relics were brought to Amalfi in 1206 following the Sack of Constantinople by the 4th Crusade.

The cathedral has a Baroque interior and a Byzantine facade adorned with paintings of Saints and a large fresco of Saint Andrew.

Composer, Richard Wagner and playwright Henrik Ibsen, completed works while staying in Amalfi and the town was a popular holiday destination for the British upper class and aristocracy during the early 20th century.

The Emerald Grotto, about 3 miles west of Amalfi, is known for its light effects and chamber of stalactites and stalagmites with many under water.

There is the Chiostro del Paradiso ("Cloister of Paradise"), built between 1266 and 1268 was used as a burial ground for the nobility.

Amalfi was also one of the first centers of paper making in Europe and the Museum of Handmade Paper celebrates this long-established paper making tradition.

Amalfi Cathedral is dedicated to the Apostle, Saint Andrew whose relics were brought to Amalfi in 1206. 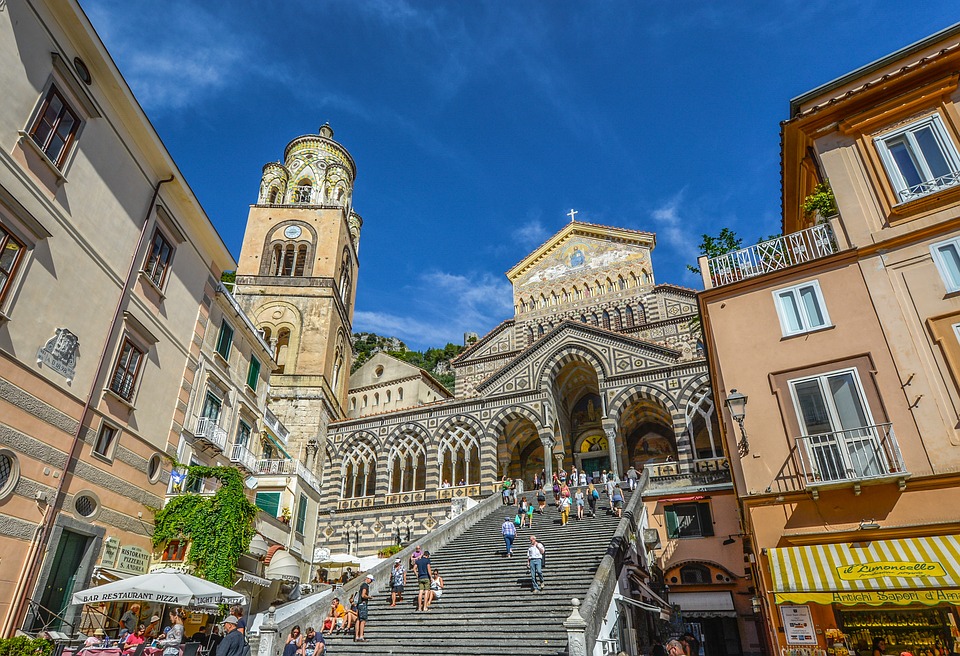 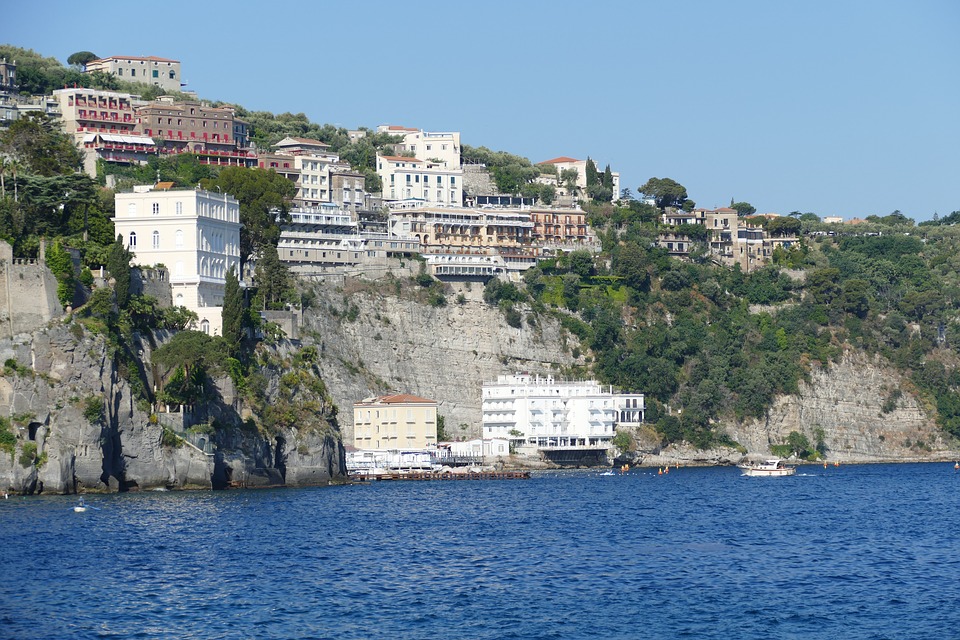 Perched high on the cliffs with panoramic views overlooking the Bay of Naples, Sorrento is the starting point of the Amalfi Coast known for its cafe-lined  Piazza Tasso and for its 14th-century church, Chiesa di San Francesco.

The town was also famously featured in the song "Torna a Surriento" (Come Back to Sorrento) composed in 1902 by Italian musician Ernesto De Curtis to words by his brother, the poet and painter Giambattista De Curtis.

The song reflecting the beauty of the town and the love and passion of its citizens has become a worldwide favorite and sung by famous performers such as Frank Sinatra, Dean Martin, Beniamino Gigli, Enrico Caruso, Luciano Pavarotti, José Carreras, Plácido Domingo and Elvis Presley.

The town's Patron Saint is Saint Antoninus of Sorrento.

The picturesque cliffside village of Positano with its colorful homes, narrow streets and beautiful sand and pebbled beaches is one of the most visited towns along the Amalfi Coast.

Its Chiesa di Santa Maria Assunta with its majolica-tiled dome is famous for the 13th-century Byzantine icon of the Virgin Mary.

The icon had been stolen by pirates from Constantinople when a storm occurred near Positano and a voice on board could be heard saying "Posa, posa!" ("Put down! Put down!").

When the icon was carried to the village, the storm abated.

The Sentiero degli Dei hiking trail, the "Path of the God", is the Amalfi Coast's famous walking trail that links Positano to other coastal towns.

One of the world's great walking trails with breathtaking views.

John Steinbeck published an essay about Positano in Harper's Bazaar in May, 1953: "Positano bites deep", Steinbeck wrote. "It is a dream place that isn’t quite real when you are there and becomes beckoningly real after you have gone." 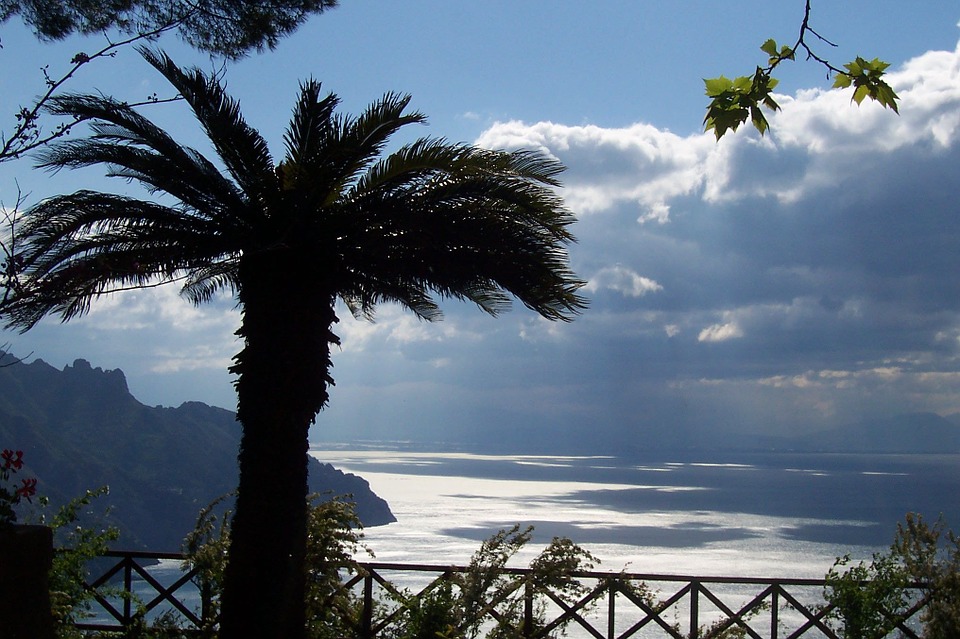 Founded as a shelter from barbarian invasions in the 5th century, it marked the end of the Western Roman Empire.

Ravello, located 365 meters above the Tyrrhenian Sea that the writer Andre Gide once said, “Ravello is nearer the sky than the sea”.

Its scenic settings and cliffside gardens make it a popular tourist destination, and earned it a UNESCO World Heritage Site listing in 1996.

German opera composer Richard Wagner visited the villa in 1880 and was so overcome by its beautiful surroundings that he imagined it as the garden of Klingsor in the second act of Parsifal.

As a commemoration, the lower garden of Villa Rufolo now hosts a Wagnerian concert every year. 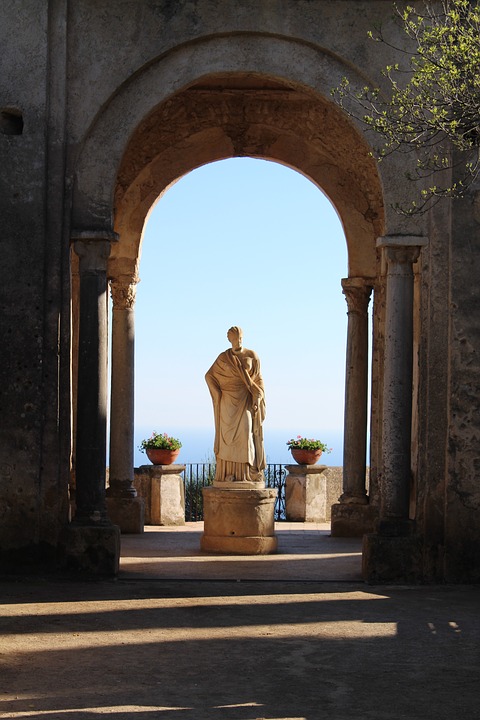 It is now a famous 5 star hotel and its gardens are open to the public.

Ernest William Beckett, a British banker and Conservative politician had visited the villa during his travels in Italy and bought it from the Amici family in 1904.

He enlisted the help of Nicola Mansi, a tailor-barber-builder from Ravello and later British nobleman, Lord Grimthorpe, to help with the restoration and enlargement of the villa and gardens from salvaged architectural elements from other parts of Italy.

American author and long-time resident of Ravello, Gore Vidal, once boasted that the villa’s belvedere, Terrazza dell’Infinito (Terrace of Infinity) is the finest in the world.

"Twenty five years ago I was asked by an American magazine what was the most beautiful place that I had ever seen in all my travels and I said the view from the belvedere of the Villa Cimbrone on a bright winter’s day when the sky and the sea were each so vividly blue that it was not possible to tell one from the other". - Gore Vidal 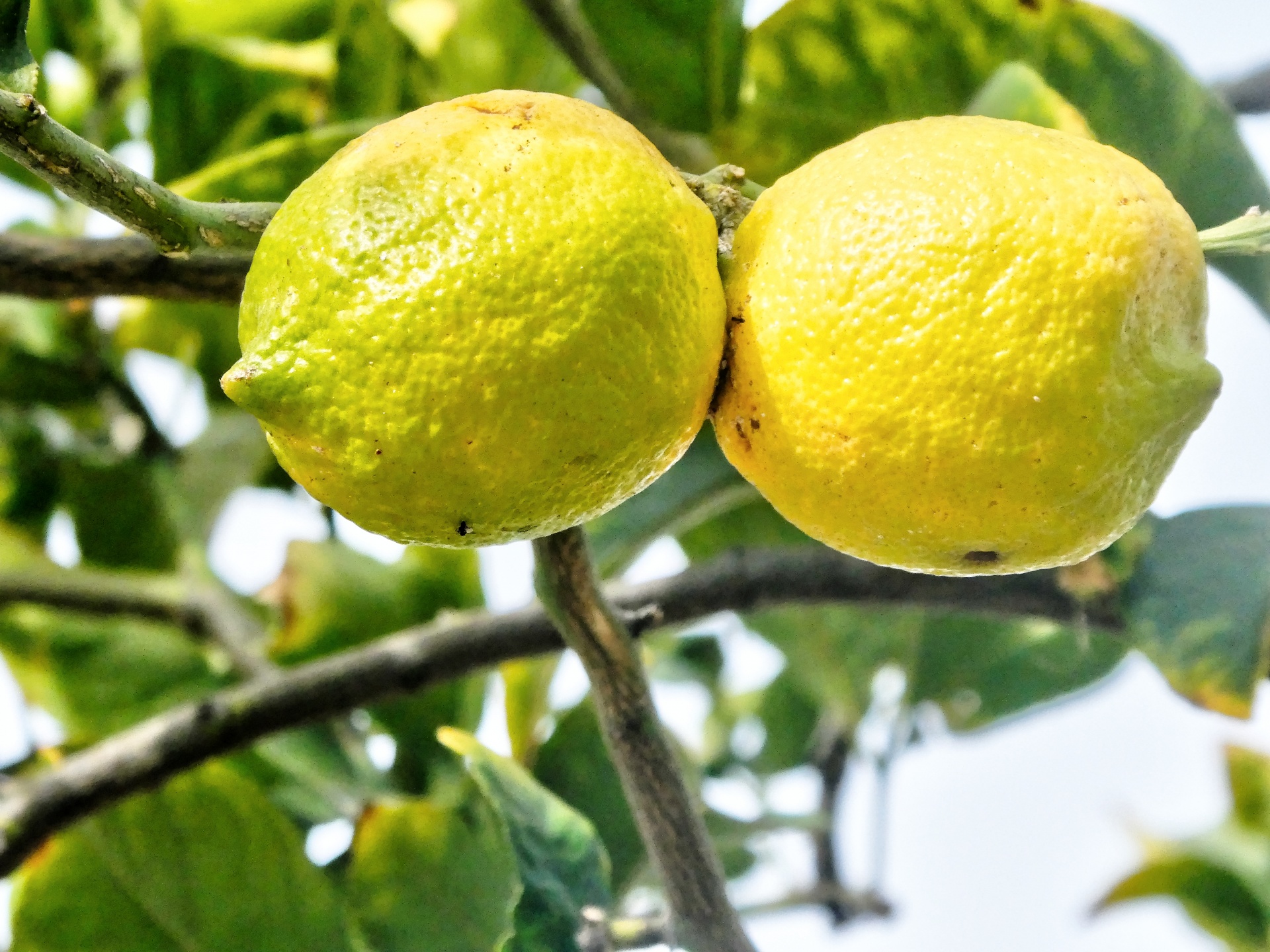 The Amalfi Coast is famed for its lemons ("sfusato amalfitano"),

The Sfusato lemons are double the size of other lemons, with a thick and wrinkled skin and a sweet, juicy flesh with few pips due to the volcanic soil, good rainfall and organic fertilizer.

Sfusato lemons are harvested three times between February and October, along the beautiful Amalfi coast. 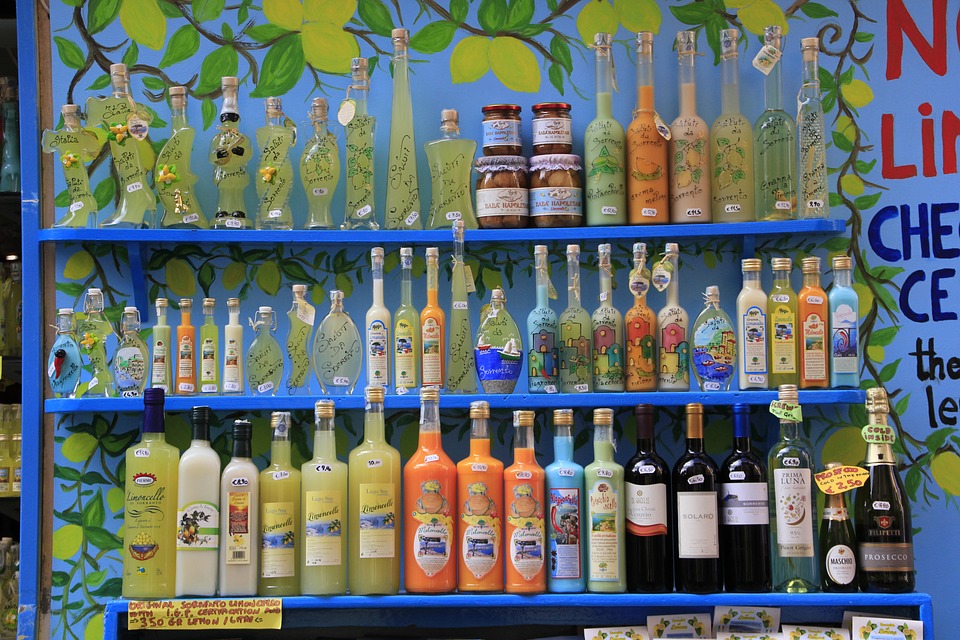 Limoncello is an Italian lemon liqueur mainly produced around the Gulf of Naples, the Sorrentine Peninsula, the coast of Amalfi, and the islands of Procida, Ischia, and Capri.

Traditionally, limoncello is made from the zest of Sfusato lemons and served chilled in chilled, small ceramic glasses as an after-dinner drink.

Limoncello liqueur however, is a perfect drink for every occasion. 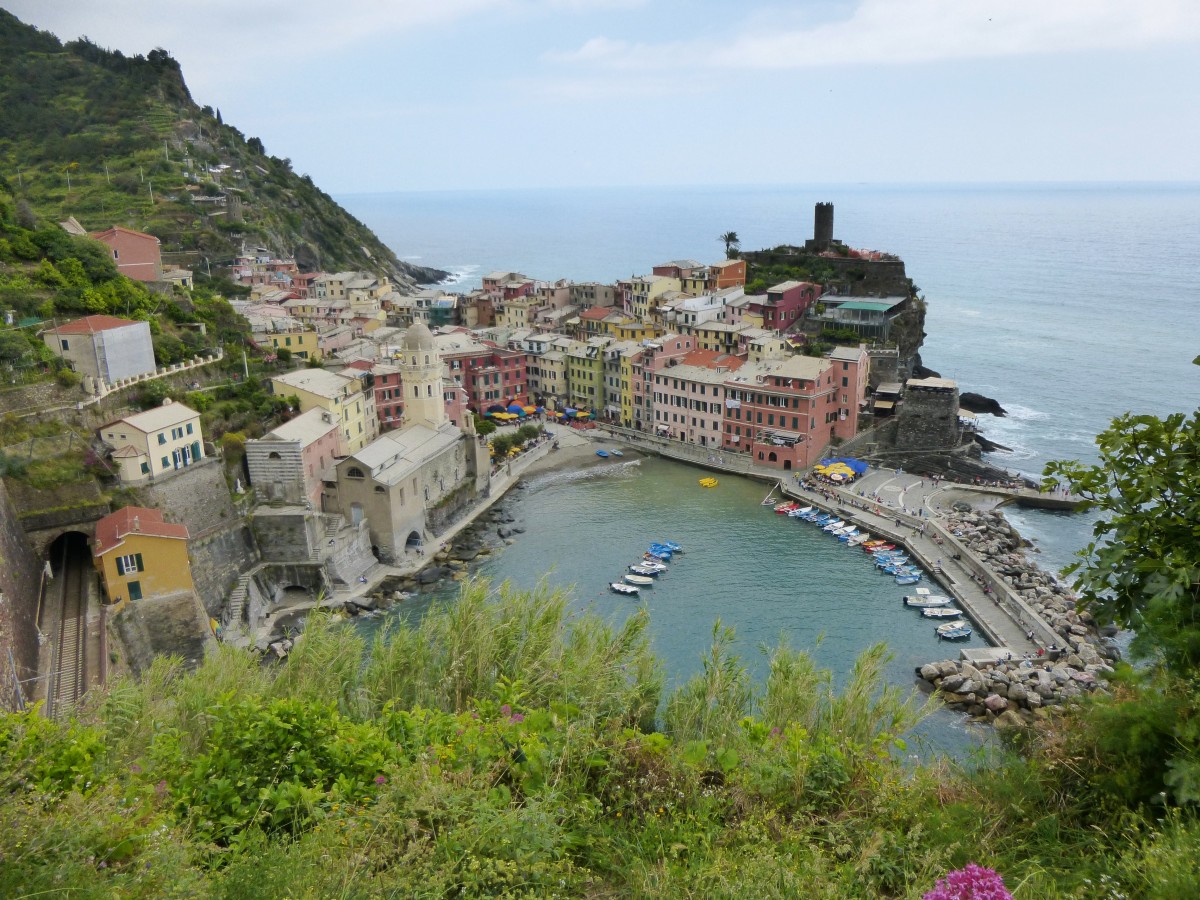 Every exciting journey along the Amalfi Coast opens your eyes to different experiences and breathtaking landscapes.

Every destination along the Amalfi Coast will provide you with exciting stories to tell back home.