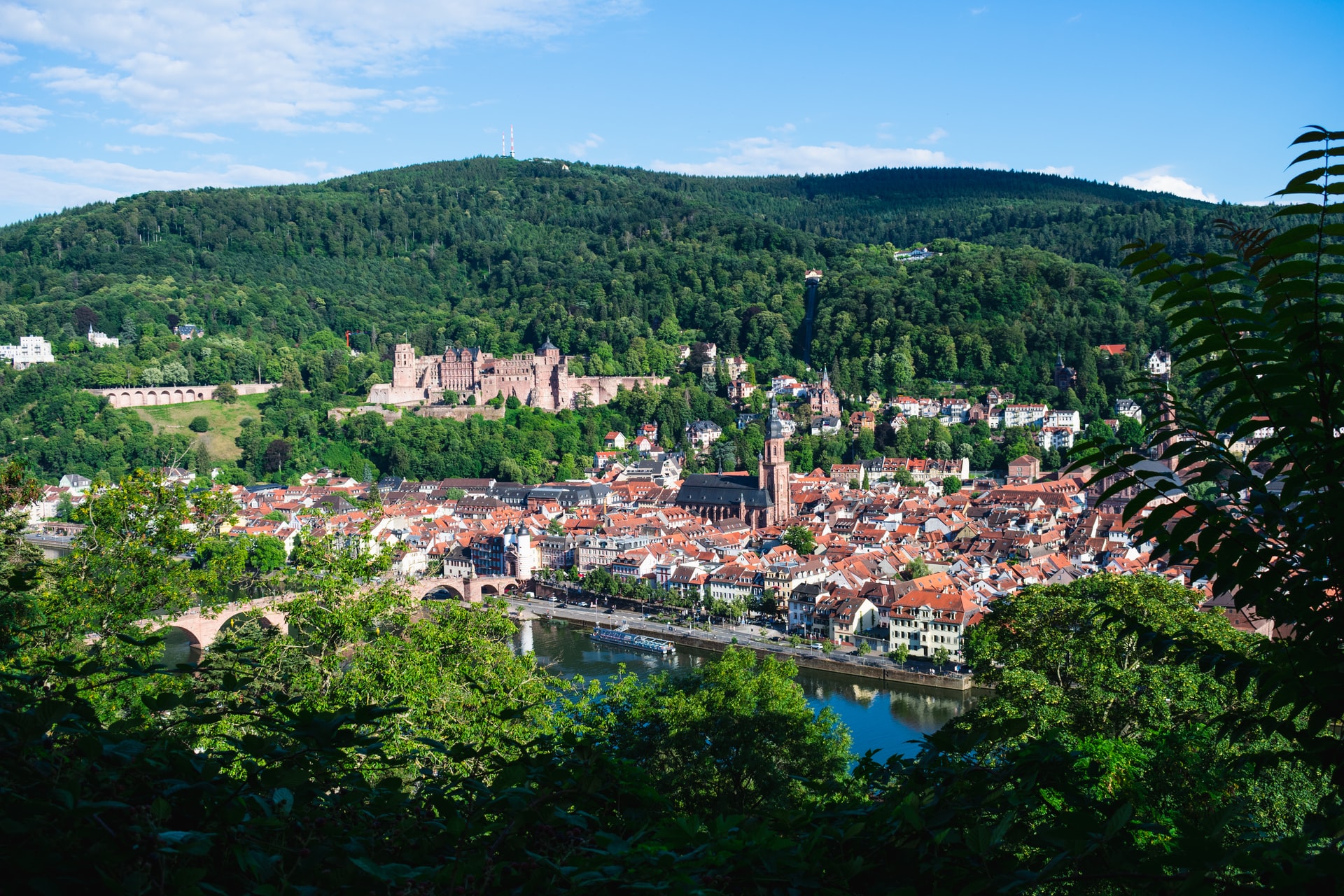 Photo by Mateo Krössler on Unsplash

Heidelberg, located about 78 km (48 mi) south of Frankfurt,  is a historic, university city in the German state of Baden-Württemberg.
Its picturesque, riverside location on the river Neckar is surrounded by forested hills, beautiful Baroque architecture and bridges and famous historical sites.
It is also a scientific home to several internationally renowned research facilities adjacent to its university, including the European Molecular Biology Laboratory and four Max Planck Institutes.
Heidelberg has become a hub for the arts, especially literature throughout the centuries and has been designated a "City of Literature" by the UNESCO Creative Cities Network.
Popular tourist destinations like Heidelberg's wonderful cityscape, Heidelberg Castle, the Philosophers' Walk, and the Baroque Altstadt (Old Town) attracts millions of tourists every year. ..

Heidelberg’s Old Town, the Altstadt is decked with bar terraces at Kornmarkt and Marktplatz, cobblestone streets and historic landmarks.
Its Baroque architecture is a result of fires caused by the French assault in 1693 during the Nine Years’ War.
Monuments like the statue of Mary on Kornmarkt from 1718 is a symbol of Heidelberg’s difficult relationship with Catholicism.
The Town Hall dates back to 1701, featuring the electoral coat of arms sculpted by Hungarian artist Heinrich Charrasky.

The Alte Brücke dates to 1788 during the rule of Elector Charles Theodore and is the ninth bridge to be built on this location.
From the 1200s to the 1700s, every bridge that was built there was destroyed by ice floes.
The current Alte Brücke has survived because it was built from stone.
It is embellished with two sculptures honoring Charles Theodore and another to the Roman goddess Minerva.
On the bank of the Altstadt are towers from Heidelberg’s Medieval fortifications.

The Great Schism of 1378 to 1417 resulted in the removal of the papacy from Italy to France in 1309.
Two rival popes were elected by the cardinals, Urban VI for the Roman faction and Clement VII for the French faction.
One successor resided in Avignon (elected by the French) and the other in Rome (elected by Italian cardinals).
This rivalry made it possible for Heidelberg to gain its own university.
Heidelberg University (Ruprecht Karl University of Heidelberg) was founded in 1386 on instruction by Pope Urban VI, making it the third university established in the Holy Roman Empire.
Today, Heidelberg University is one of the world's most reputable, surviving universities.

Heidelberg Castle (Schloss Heidelberg), perched 80 metres above the Altstadt (Old Town) and Neckar River, is an awe-inspiring, old, Renaissance fortress that was home to the Imperial Prince Electors of Heidelberg.
The castle's construction began around 1300 and Prince Elector Ruprecht III (1398 – 1410) used it as a regal residence.
This magnificent red sandstone structure is 330 feet (100 meters) above the northern side of the Königstuhl hillside and the river giving panoramic views of the city.
The castle was built as a fortress in the 13th century, but in the 15th and 16th century was expanded into a palace for Heidelberg’s imperial rulers.
It was devastated in 1622 during the Thirty Years’ War (fought largely within the Holy Roman Empire from 1618 to 1648) and by the French in 1689 and 1693.
It was finally destroyed by lightning in 1764.
The castle ruins have inspired generations of people such as the Romantics from the start of the 19th century with its panoramic vistas.
Heidelberg Castle was partially rebuilt since its demolition in the 17th and 18th centuries.

Kurpfälzisches Museum
The Kurpfälzisches Museum is a museum of art and archaeology located in the Palais Morass.
It was founded in the late 1870s, when the city purchased the private collection of the artist and art historian Charles de Graimberg.
Heidelberg Tun
The Heidelberg Tun is a huge wine vat contained within the cellars of Heidelberg Castle.
It was constructed in 1751 from one hundred and thirty oak trees.
Philosophenweg
Philosophenweg (The Philosophers Walk) is a path located on the northern banks of the Neckar River.
During the Romantic Period professors and philosophers of Heidelberg would walk along the path to enjoy its tranquil, natural beauty and panoramic views of the Neckar River, Altstadt and Heidelberg Castle.
Heiligenberg
Heiligenberg is a Renaissance-style castle in Heiligenberg, Linzgau, north of the Bodensee and is on a plateau 730 metres above sea level, with views down onto the Bodensee and the Alps.
Church of the Holy Spirit
The Church of the Holy Spirit located in the marketplace of the Old Town center, was constructed between 1398 and 1515.
It was the burial place of the Electors of the Palatinate and represented the Palatinate royal seat.
During the Palatine War of Succession, the graves of the Electors were destroyed leaving only the founder of the church, Elector Ruprecht III, who reigned as King of Germany until his death in 1410.
Studentenkarzer
Studentenkarzer is a University prison with cells used for unruly students from 1778 to 1914.
Haus zum Ritter (House of the Knight)
The house name "Zum Ritter" goes back to the fouteenth century.
In 1566 the knight, Hans von Waldkirch added two storeys to the house, from whom the name is derived.
The Renaissance building is located in the middle of Heidelberg's Old Town, opposite the Church of the Holy Spirit and is the only house that survived the great city fire of 1693 during the War of the Palatinate Succession because it was built from stone.
The house is also known for the fresco paintings by Tobias Stimmer on its facade.
Neckarwiese
Popular riverside park with lawn areas and walking paths.
Jesuitenkirche
Former Jesuit Church located next to the Holy Spirit Church with 18th-century, whitewashed interiors, chandeliers and an intricate altar painting.
The church was built in the Baroque style from 1712 to 1759.
The neo-baroque tower was added in the years 1868 to 1872.
Königstuhl
The Königstuhl, is a 567.8 metre high hill in the Odenwald Mountains.
Its summit gives visitors breathtaking views of Heidelberg and the Neckar River.
Heidelberg Thingstätte
The Heidelberg Thingstätte was built during the Third Reich as an open-air theatre on the Heiligenberg in Heidelberg.
It enjoyed brief popularity in pre-war Nazi Germany during the 1930s.

Saumagen
Saumagen is a delicious regional specialty made of a pig's stomach stuffed with lean and cured pork, sausage meat, bacon, vegetables such as potatoes, carrots, onions and herbs like marjoram, nutmeg and white pepper.
Additional condiments may include cloves, coriander, thyme and garlic.
Saumagen is usually served as fried slices with Sauerkraut and mashed potatoes as well as German mustard for dipping and accompanied by a dry white wine which is a specialty of the region or German beer.
Poor, Palatinate farmers invented Saumagen in the 18th century by using leftovers from previous meals which was common in rural areas.
Spätzle
Spätzle, also known as the "Swabian national dish" originated in the 18th century.
It is a fresh, egg-based pasta that is traditionally made by hand and is typically served as a side for meat dishes with gravy.
This "Swabian dish" is also found in the cuisines of southern Germany and Austria, Switzerland, Hungary, Slovenia, Alsace, Moselle and South Tyrol.
Sauerbraten
Sauerbraten is regarded as one Germany's national dishes.
It is a traditional German roast of marinated meat with several regional variations in Franconia, Thuringia, Rhineland, Saarland, Silesia and Swabia.
It can be prepared from a variety of roasting meats such as beef, venison, lamb, mutton and pork and is served as a traditional, Sunday family dinner.