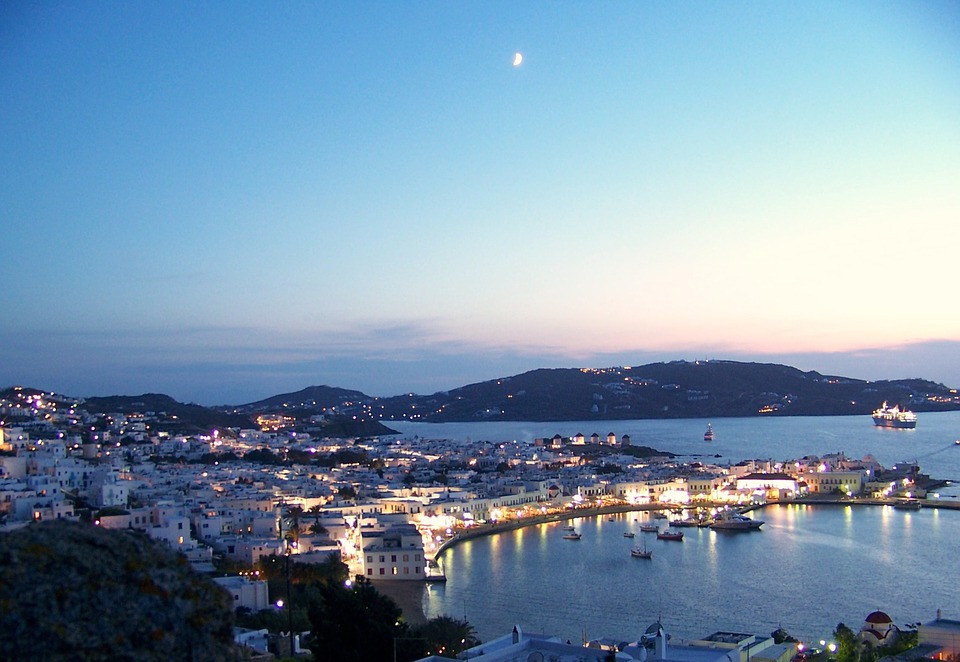 Mykonos, 'island of the winds', is a Greek island of the Cyclades group in the Aegean Sea neighboring the UNESCO world heritage island of Delos and lying between the islands of Tinos, Syros, Paros and Naxos.

The town is also known as Chora ("Country" in Greek, but is the name of the island's "Town")

Tourism is a major industry and Mykonos is well known for its party atmosphere, beaches and vibrant nightlife.

It is also famous for its beautiful white windmills, its "Little Venice" and for the islands's beloved mascot, Petros the Pelican.

Mykonos Airport is located 4 kilometers (2.5 mi) southeast of the town and is served by international flights during summer.

The island is also accessible by boat, ferries and high-speed catamaran services which run daily from Piraeus, Rafina and from the surrounding islands

The village of Ano Mera, about 7 km east of Chora, is noted for its 1542  monastery, Panagia Tourliani. 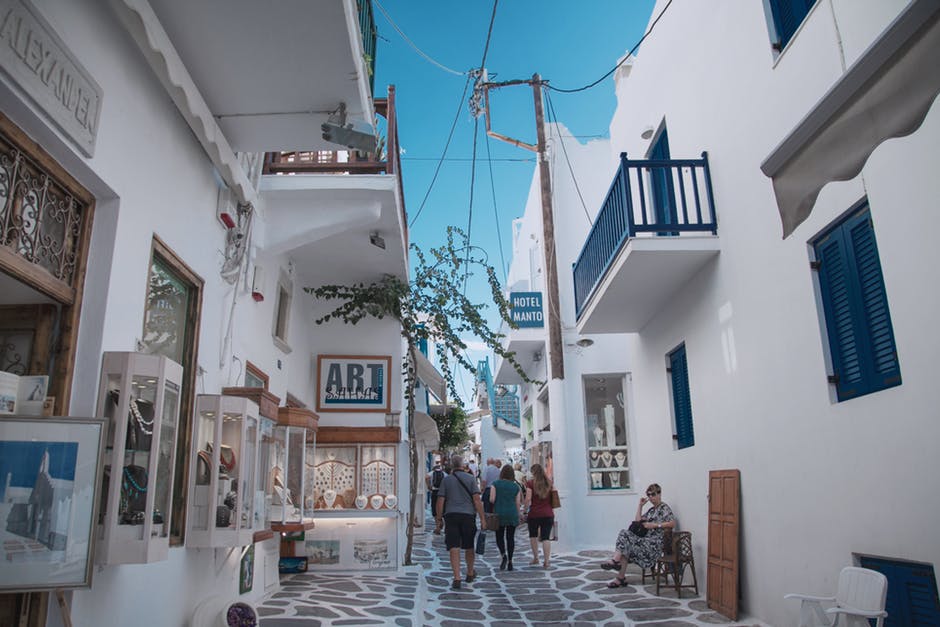 The Cyclades are Greek islands located in the southern part of the Aegean Sea.

For the ancient Greeks, the Cyclades formed a circle around the sacred island of Delos who considered it the birthplace of the twin gods, Artemis and Apollo.

Delos also became important as a meeting place and the treasury of the Delian League (association of Greek city-states) in 478 BC under the leadership of Athens.

Herodotus records Carians as the original inhabitants of the island followed by Ionians from Athens in the early 11th century BC.

Later, it came under the control of the Roman Empire, then the Byzantine Empire until the 12th century and Venetian rule in 1390.

In 1537, while still under Venetian control, an Ottoman naval fleet also established itself on the island.

The Ottomans eventually conquered the whole island in 1718 forcing the Venetians out.

The Cyclades Islands became Greek again in the 1830's after the Greek War of Independence. 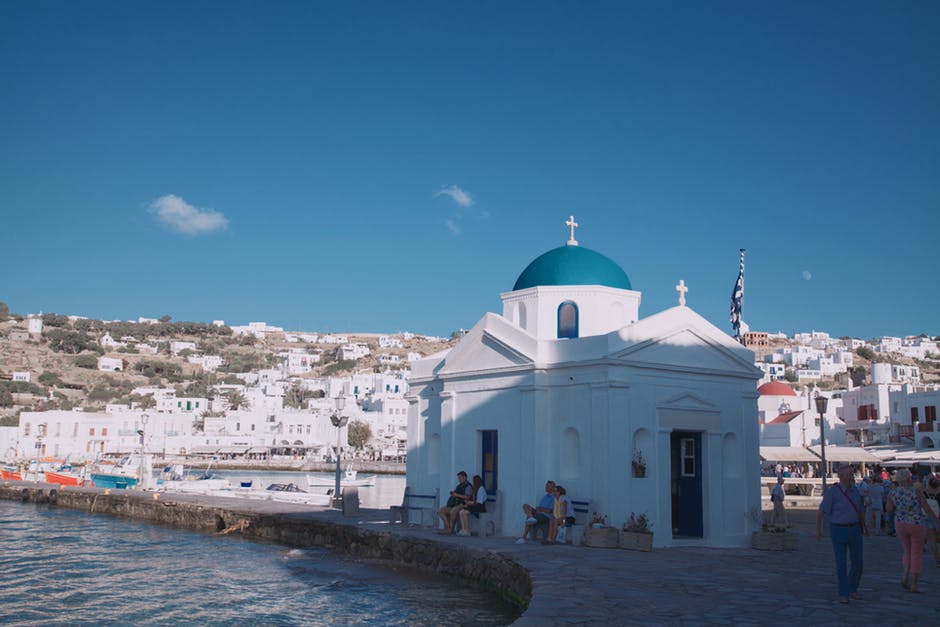 Of the 400 churches on the island, the most photographed, is the beautiful, whitewashed Byzantine church, Panagia Paraportiani ("standing next to the door" because it was located next to the the entrance of the Kastro area) in the town of Chora.

Building of the church began in 1425 and was completed during the 17th century.

There is also a Catholic church on the island in Alefcandra Square near the picturesque windmills of Mykonos.

It was built in 1668 and dedicated to the Virgin of St. Rosary.

The icon above the Holy Table was transported to the island from Venice in 1715 and depicts the Virgin Mary and Baby Jesus between Saint Dominic and Saint Catherine of Siena. 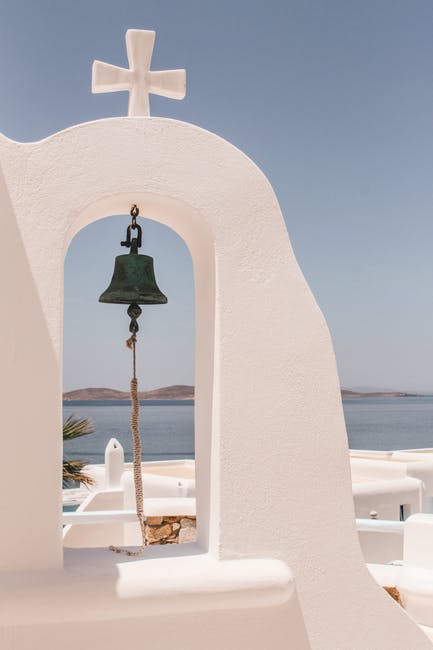 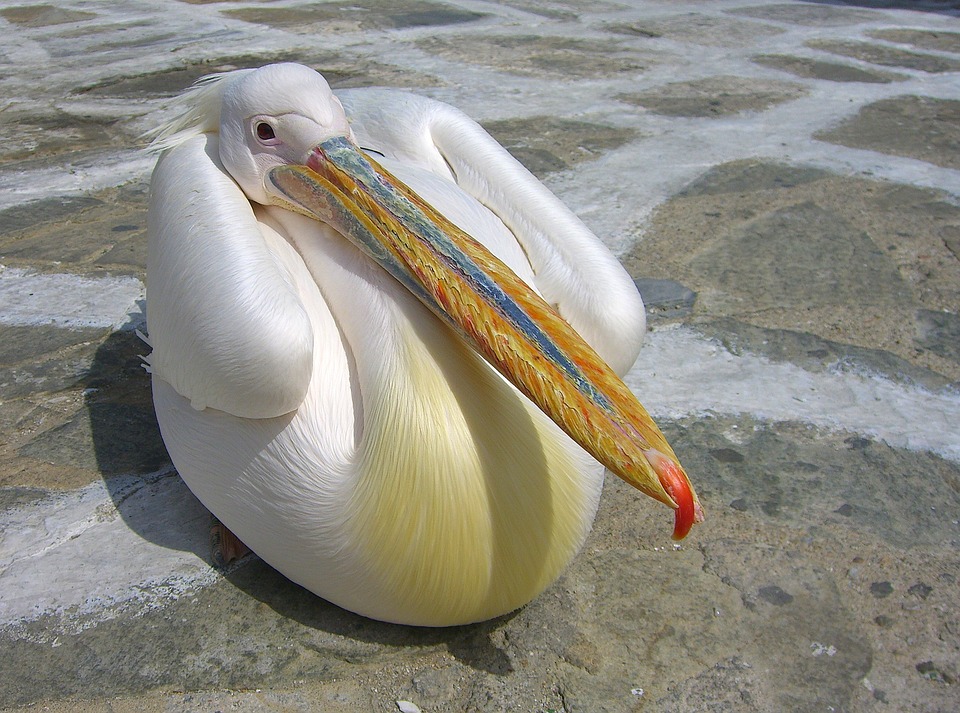 Petros the pelican is the beloved mascot of Mykonos.

In 1958, a local fisherman found the wounded pelican.

He nursed it, gave it shelter, was adopted by the locals and, became an icon for tourists worldwide.

Sadly, on the 2nd of December 1985, Petros the Pelican was was hit by a car from which he did not recover.

Three new pelicans now reside around the main town and are often spotted around the waterfront or strutting the cobbled streets of Chora posing with tourists. 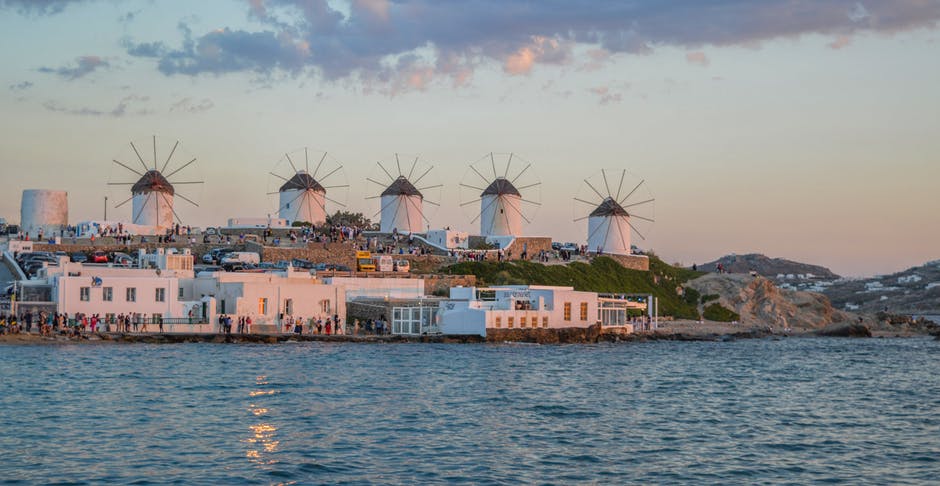 century to mill wheat and remained in use until the early 20th century.

Today, they have been restored to serve as homes and one has been transformed into a museum. 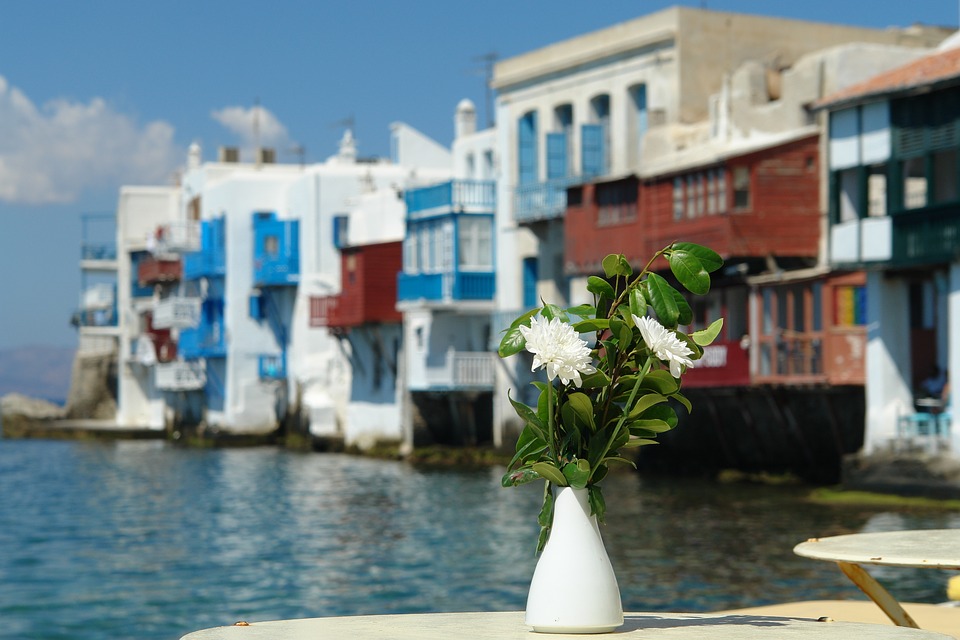 Little Venice (Alefkandra) refers to the rows of former fishing houses with their wooden balconies that line the waterfront with their balconies hanging over the sea. at the western end of Chora.

Building began in the mid-18th century and were home to rich sea merchants and captains.

Many people on the island however, believed that the owners were secretly pirates because the basement of their homes provided easy access to the sea as well as underground storage.

Many of them have now been converted into cafes, bars, restaurants and shops and have become famous as the "Little Venice of Mykonos", a favorite place for watching the sunset and for artists who come to paint its picturesque settings. 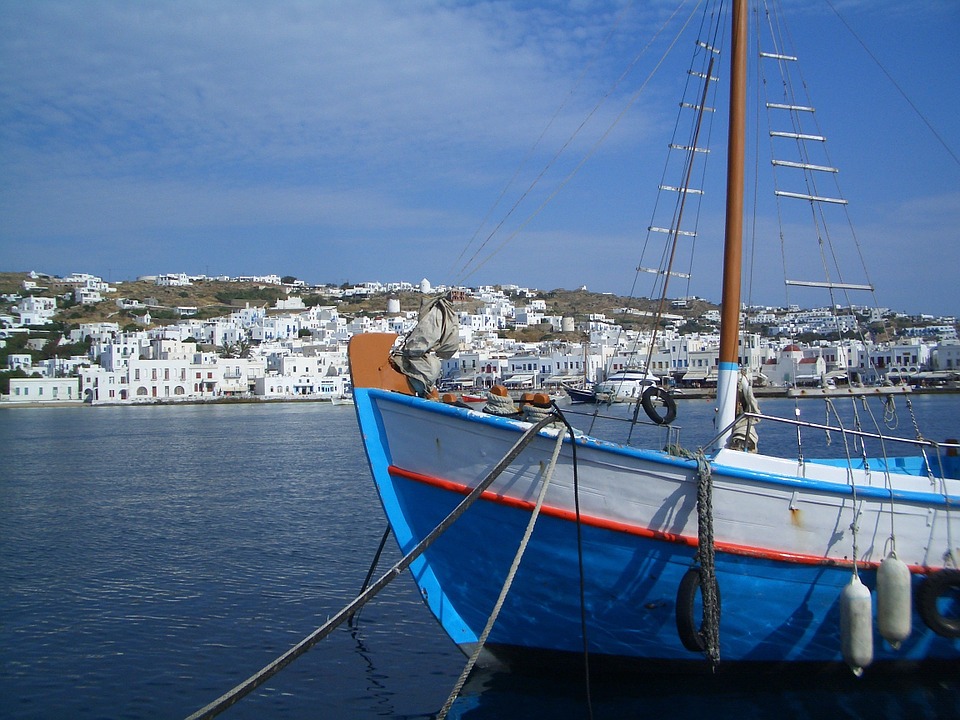 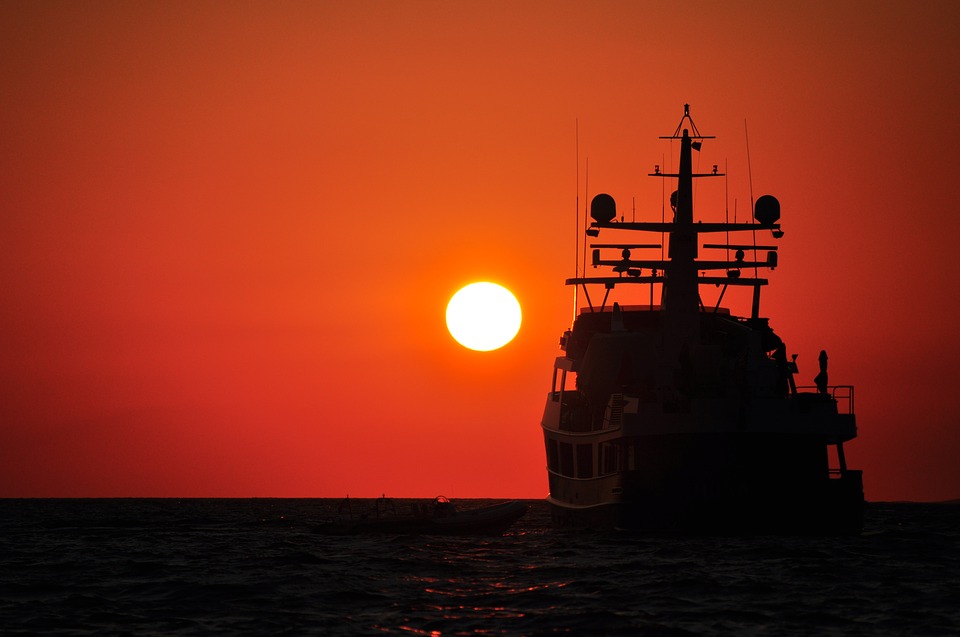 Armenistis Lighthouse, located in Fanari, ("lantern" in Greek), about 6.5 km (4.0 miles) from Chora was built in 1891 after the British steamboat Volta sank in 1887 on the north coast of Mykonos.

The 19 meter lighthouse still operates and is a constant reminder of the island's rich maritime history.

Founded in 1983 by George M. Drakopoulos and opened to the public in 1985 to undertake the preservation, promotion and study of Greek maritime history, tradition and merchant shipping in the Aegean Sea.

The Aegean Maritime Museum was the first ever Greek museum to restore living historical exhibits as they were originally designed and built.

Exhibits include historical and replicas of famous ships, collections of coins with nautical scenes from the 5th century BC to the 4th century AD including a variety of nautical instruments.

Archaeological Museum of Mykonos houses a large number of vases dating from the prehistoric to the late Hellenistic period with its most famous from the island of Tinos, depicting scenes from the fall of Troy.

Artefacts include ceramic pottery from the Cyclades and 7th to 6th century BC works from other areas in the Aegean as well as the findings from the Putrefaction Pit of 425-426 BC, discovered in 1898 on the islet of Rheneia.

The Folklore Museum is a former 18th-century sea captain's house located near the church of  Paraportiani in Chora.

The museum also houses models of 19th-century ships, maps, an anchor and canons used during the Greek War of Independence of 1821.