Christian Symbols of Christmas represent love, hope, joy and light.
Christmas is the most wonderful festival of the year celebrating the Birth of Jesus Christ Who was Born in a humble stable in Bethlehem, on that first Christmas, more than two thousand years ago surrounded by farm animals and shepherds.
The real Christmas Story has Divine origins that make it a Holy Day for those of faith to worship our Lord and Savior, Jesus Christ.
Christ comes from the Greek word "Christos", meaning "Anointed One of God" (Daniel 9:25; Isaiah 32:1).
The twelve day festive, Christian and cultural holiday begins Christmas Eve on December 24th until Epiphany in the New Year which falls on the 6th of January.
Like a bright shining light, from November onward, the Christmas Spirit can be felt and seen everywhere that are full of meaning and goodwill with their wonderful traditions of gift giving, beautiful Christmas Carols, Nativity scenes and Christmas trees with their glitter and tinsel.
Christmas Eve - December 24
Final preparations for Christmas are made on Christmas Eve with last-minute shopping for presents or food.
Children will hang their Christmas stockings for the arrival of Santa Claus in the early hours of Christmas morning with their presents.
People and churches will organize groups to go Christmas Caroling from door to door, or in public venues to raise money for favorite charities.
Christmas Day - December 25
Christmas Day is marked by church services to celebrate the Birth of Jesus Christ.
On Christmas morning, children will open beautifully wrapped gifts laid underneath the Christmas tree that came with love.
In every kitchen, stoves and ovens are fired up to prepare all the mouthwatering food that will be served on this special day.
Around the beautifully decorated festive, Christmas table the family will once again gather to enjoy a wonderful array of Christmas fare by people who devoutly follow the traditions of their Christian faith. 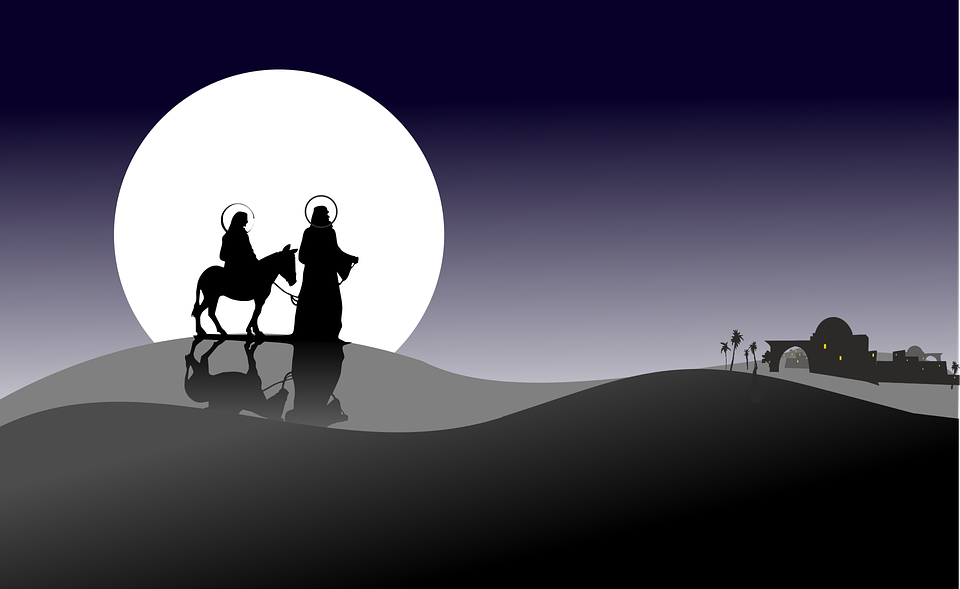 Archangel Gabriel
Archangel Gabriel is the Christmas Angel who delivered the Message to Mary, a young Jewish girl from Nazareth in the region of Galilee, who was promised in marriage to Joseph, that she was chosen by God to Bear and give Birth to the Son of God, Jesus Christ (Luke 1:27-38).
Archangel Gabriel greeted her with the words "Rejoice O Blessed One, the Lord is with Thee! Blessed are Thou amongst women"!
Mary answered, "Let it be according to the Will of God".
The Name, Jesus was then given to Mary by the Archangel Gabriel (Luke 1:31).
Joseph, a humble man, became the earthly step-father of Jesus who raised Him in the Jewish spiritual traditions and trained Him in his trade, as that of a carpenter.
Humble Donkey
More than 2000 years ago, a humble donkey carried our Blessed Virgin Mary from Nazareth to Bethlehem to give Birth to the King of Kings.
Humble Stable
The Virgin Mary gave Birth to the Baby, Jesus in a humble stable in Bethlehem.
Bethlehem, ("City of David"), was the birthplace of David (Jewish shepherd boy who slew the giant Phillistine warrior, Goliath), and where he was anointed and crowned as the second king of Israel by the prophet Samuel.
Jesus came into this world in humility, simplicity and in poverty.
His Crib was an animal feeding trough.
Angels
On the night of Christ's Birth, Angels announced to humble shepherds keeping watch over their flock that first Christmas Eve to be the first witnesses of Jesus' Birth along with the animals in the stable.
In Luke 2:11 they proclaimed the joyous Birth, “The glory of the Lord shone round about them and said unto them, Fear not: for, behold, I bring you good tidings of great joy, which shall be to all people. For unto you is born this day in the city of David a Savior, which is Christ the Lord".
(Luke 2:10, 11)
Star of Bethlehem
The Star of Bethlehem is the inspiring light that shone in the night sky on that first Christmas.
It symbolizes Jesus Christ as the "Light of the World" that shines the light of hope for all mankind.
The Three gentile (non-Jewish), Wise Men came from the east following the bright Star which led them to the Stable in Bethlehem.
They bowed before Him to acknowledge His Deity and gave Him gifts of gold, frankincense and myrrh.
The gentiles later, would make up most of the Christian world because, from that foundation, Christianity grew and spread in many directions from ancient Jerusalem.
The Three Wise Men now adorn Nativity scenes around the Christian world. 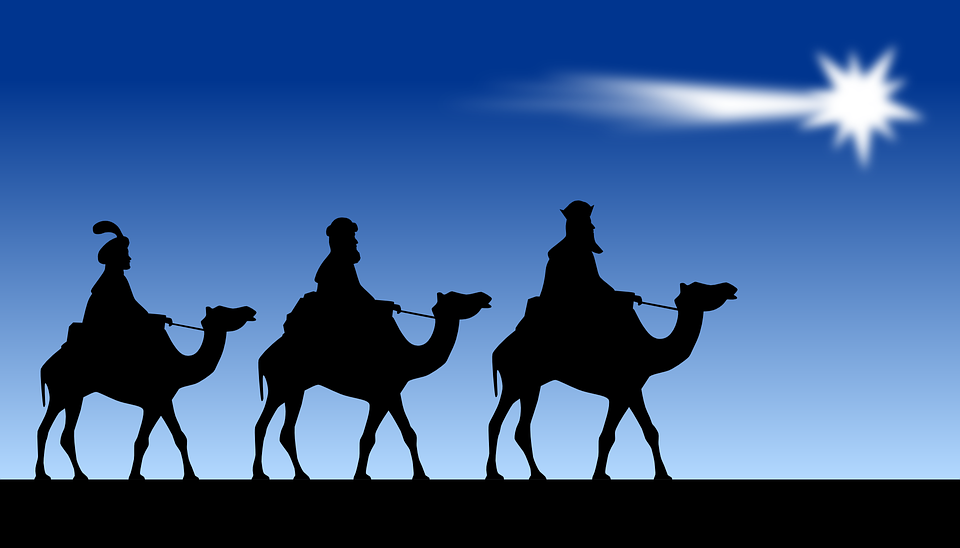 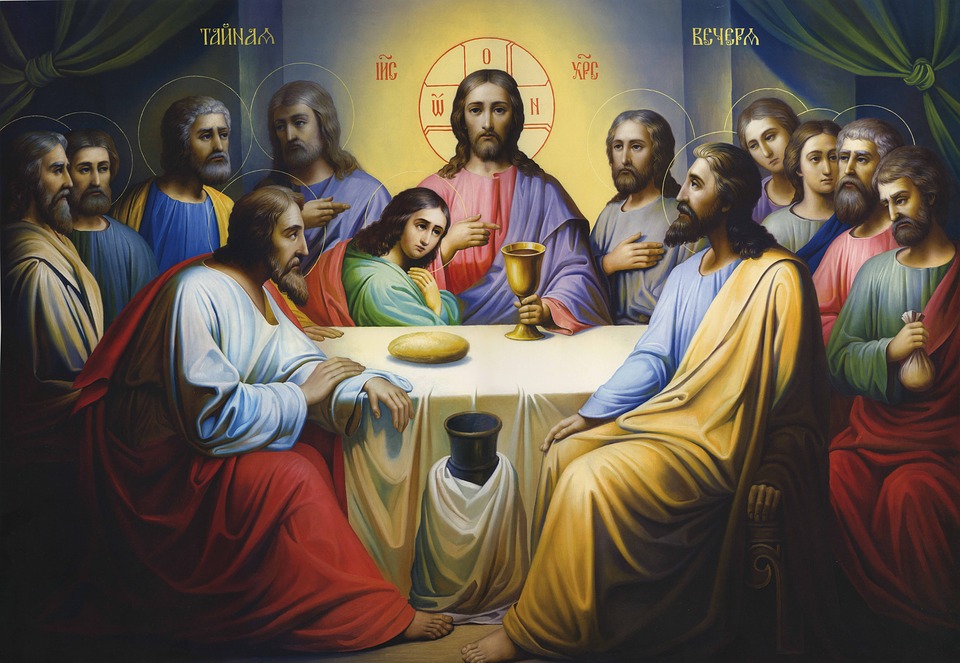 The Birth Of Jesus Christ marked the beginning of the Christian Era and divided history into the BC/AD system of dating.
Christianity gives humanity their greatest asset - Faith in God and Jesus Christ!
Christianity takes its name from the Greek word "Christ" meaning "Anointed One" (with the Blessing of God).
B.C/A.D. System of Dating
B.C. means “Before Christ”.
A.D. (Latin: “Anno Domini”) meaning “In the Year of our Lord,” referring to the year of Christ’s Birth.
Since then, every historical event as well as the Christian Calendar is measured as A.D. and is used with both, the Julian and Gregorian calendars.
"Light of the World" (Greek: φώς τοῦ κόσμου)
God gave humanity the Gift of His only Son so we can inherit The Kingdom of God.
Jesus Christ is the "Light of the World."
"I am the light of the world. Whoever follows me will never walk in darkness, but will have the light of life."
Through Jesus, we find the the light of love, compassion and mercy.
Alpha and Omega
Alpha (Α) and Omega (Ω), in Christianity, the first and last letters of the Greek alphabet are rooted in the New Testament which was written in Greek.
The phrase "I am the Alpha and the Omega" (Greek: "ἐγώ εἰμί τὸ Ἄλφα καὶ τὸ Ὦ"), is an appellation of Jesus and of the Father in the Book of Revelation (Revelation 1:8) that symbolizes the infiniteness of God meaning the beginning and the end. 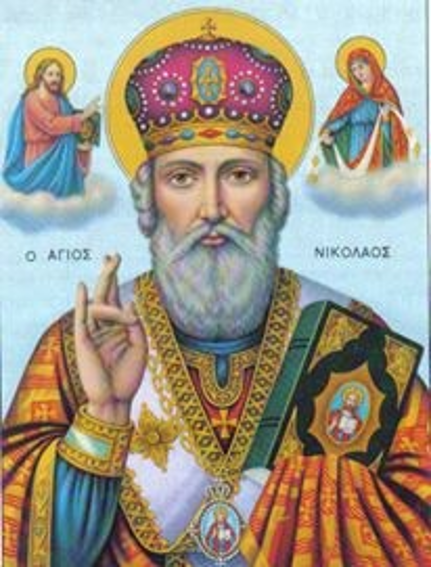 Saint Nicholas
Saint Behind the Story of the First Father Christmas (Santa Claus)
Saint Nicholas was the Greek Orthodox Bishop of Myra in southern Asia Minor (present-day, Turkey) in the 4th century AD, who is the symbolic, gift-bearing figure identified with Father Christmas (Santa Claus) who became known for his generosity and his love for children.
Nicholas was born in the ancient Lycian seaport city of Patara (colonized by Greeks from the island of Crete) in Asia Minor, about 270 AD during Roman occupation.
Born to wealthy parents who raised him to be a devout Christian, they died while Nicholas was still young and left him a fortune.
Nicholas used his inheritance to assist the needy, the sick and the suffering.
One of the best-known stories of Saint Nicholas' generous gift giving involved a pious Christian with three daughters and not enough money to provide them with dowries which meant they could not marry.
Nicholas walked by the house on three successive nights and each time threw a bag of gold through the window thus providing them the opportunity to marry.
Father Christmas (Santa Claus)
Father Christmas symbolizes this spirit of gift giving with Saint Nicholas who had a reputation as a secret bringer of gifts to poor people and children.
He is a part of the Spirit of Christmas who arrives on a sleigh in the early hours of Christmas morning to place presents for children in Christmas stockings or by the family Christmas tree.
Gift Giving
Gifts given at Christmas are symbolic of the first tributes made to the Baby Jesus by the Three Wise Men after His Birth.
Inspired by the three gifts the Baby Jesus received from the Three Wise Men of gold, frankincense and myrrh, many parents want a three-gift Christmas for their children.
The Three Gift Rule:
*Something they want.
*Something they need.
*Something to read.
Gift giving conveys the Spirit of Christmas as symbolic expressions of love, respect, gratitude and goodwill to family, friends and charities.
Christmas Carols
The joyous themes of Christmas Carols with their wonderful, heart-warming messages of praise and joy, make everyone feel the Christmas spirit with love and good cheer every year.
They express the joyful and merry sounds of everything that Christmas stands for and will always have a special place in the hearts of young and old as part of our most beloved in our Christian heritage.
Colors of Christmas
The classic colors of Christmas are:
Red represents the Blood shed by Jesus Christ during his Crucifixion.
Green represents the Resurrection of Jesus to everlasting life and Glory in the Heavenly Kingdom of God.
Gold symbolizes one of the Gifts from the Three Wise Men brought to the Baby, Jesus.
*White represents the Purity of Jesus Christ. 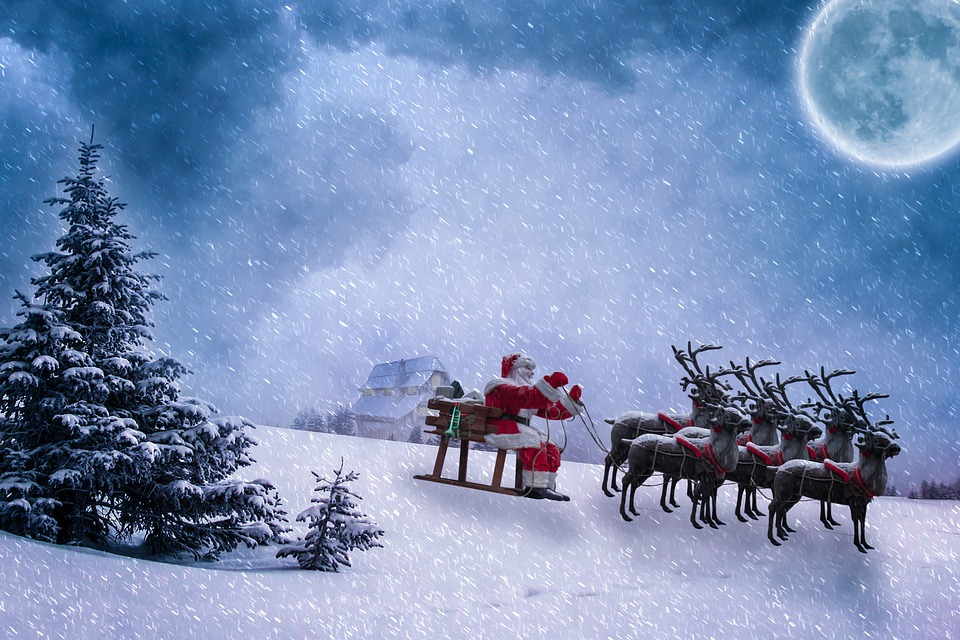 The Cross of Christ
The Crucifixion and Resurrection of Jesus Christ are the two most important events in Christian history.
On that first Good Friday, our dear Lord, Jesus Christ went to the Cross to heal all those who had faith in Him.
The Cross of Christ reminds Christians of God's Act of Love and Atonement in Christ's Sacrifice at Golgotha - "the Lamb who takes away the sins of the world. 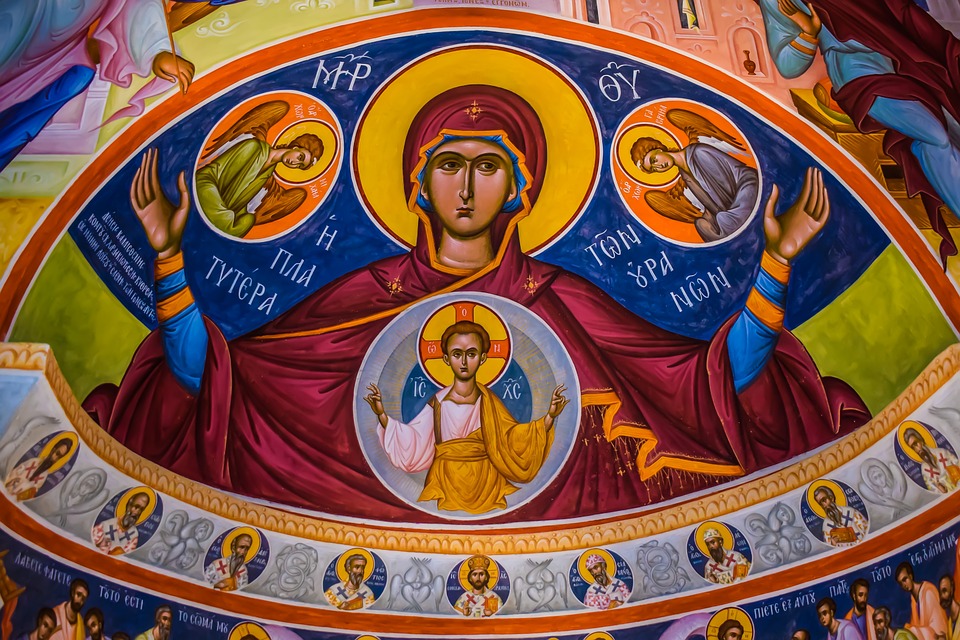