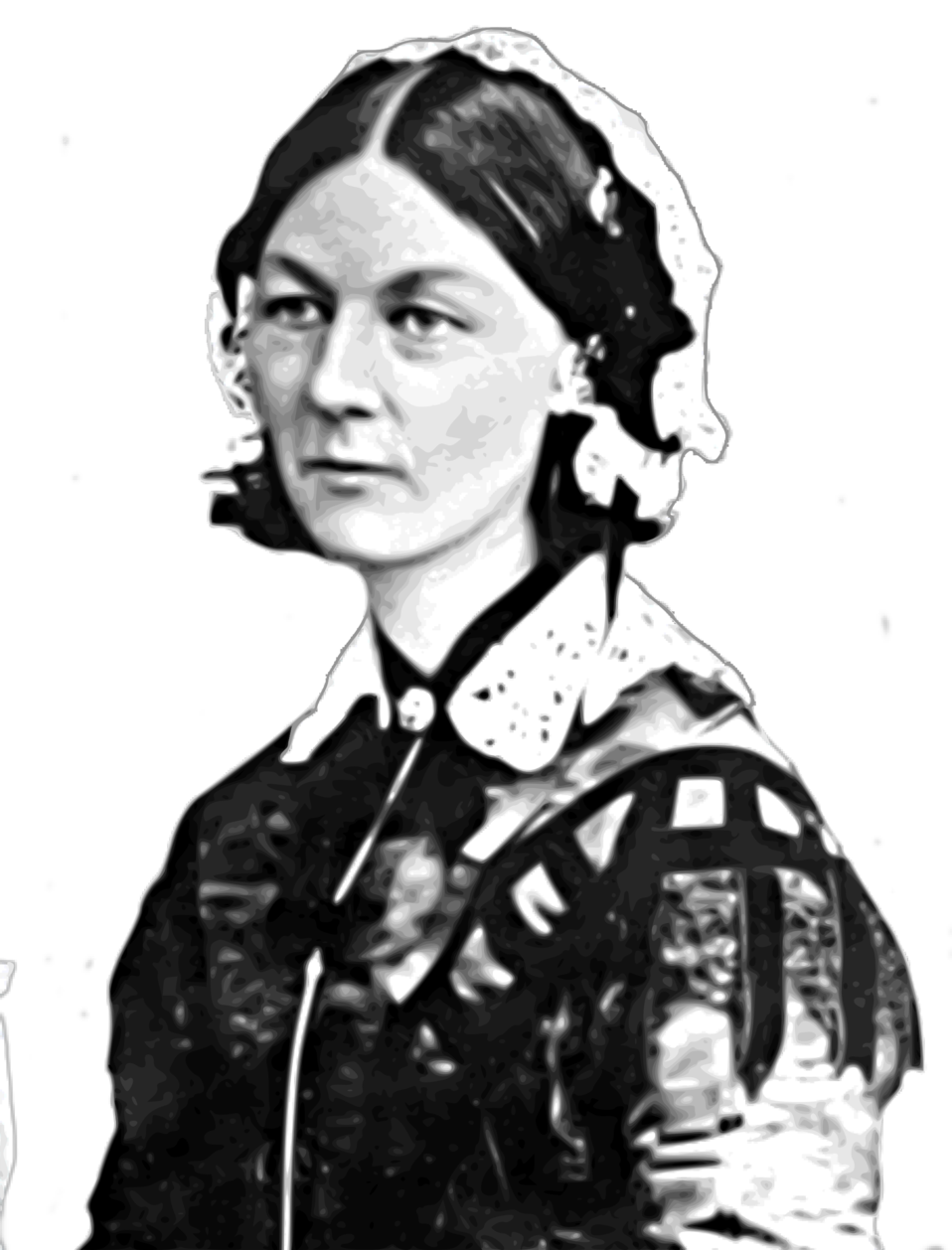 Victorian-era nurse, Florence Nightingale (1820-1910), was an English social reformer, statistician who dedicated her life to the treatment of the sick and frail.
She is revered as the founder of modern nursing and her iconic image as "The Lady With the Lamp," tending to wounded soldiers in the darkness during the Crimean War has endured.
Her legacy made nursing a respectable profession for women.
Florence Nightingale, "The Lady with the Lamp", (May 12, 1820 - August 13, 1910) was a British nurse, statistician, social reformer and the founder of modern nursing.
She was a pioneering figure who changed 19th and 20th-century nursing from an untrained profession to a highly skilled and well-respected medical profession.
She became famous for her nursing work during the Crimean War (1854 - 56) and an icon of the Victorian era as "The Lady with the Lamp" or simply, "the Angel of the Crimea," who made her nightly rounds of wounded and dying soldiers.

Florence Nightingale was born in Florence, Tuscany, Italy, on May 12, 1820 to a wealthy, upper class British family and was named after the city of her birth where the Renaissance started around the years 1350 to 1400 by its writers, painters, architects, and philosophers.
Florence's older sister Frances Parthenope had similarly been named after her place of birth in Parthenope, a Greek settlement now part of the city of Naples.
Parthenope, in southern Italy was settled by ancient Greeks as part of their colonization, in the 8th and 7th centuries BC.
Education
The family moved back to England in 1821, with Florence being brought up in the family's homes at Embley, Hampshire and Lea Hurst, Derbyshire.
Victorian England (1820 to 1914), was characterized by Britain's status as the most powerful nation in the world where the first Industrial Revolution (1760 - 1840) started and Charles Dickens (1812 - 1870).
Florence was provided with a classical education in history, philosophy, and literature including studies in mathematics, German, French, Italian, Greek and Latin.
Never satisfied with the traditional female skills of home management she preferred was to read the great philosophers and to engage in political and social debates with her father.
Divine Calling
Florence Nightingale never married because in 1837, she came to the conclusion that nursing was her God-given calling where she could serve both God and humanity.
But, during the Victorian era, a young lady of her social stature was expected to marry to ensure her class standing and to become a wife and mother - not take up a job that was viewed by the upper social classes as lowly menial labor.
The politician and poet Richard Monckton Milnes pursued her but, after a nine-year courtship she rejected him, convinced that marriage would interfere with her Divine calling to nursing.
Her parents and sister were not pleased and eventually allowed Florence to pursue her ambition.
Her father gave her an annual income of £500 (roughly £40,000/US$65,000 in present terms), which allowed her to live comfortably and to pursue her nursing career.
Nursing Career
Florence enrolled at the Institution of Protestant Deaconesses at Kaiserswerth in Germany for training in 1850 and again in 1851 where she learned basic nursing skills, the importance of patient observation, and the value of good hospital organization.
In 1853, she became the superintendent of the Institution for Sick Gentlewomen (governesses) in Distressed Circumstances, in London and then became the superintendent of nurses at King's College Hospital.

The Crimean War (1853 - 56) was a major European military conflict of the 19th-century which saw an alliance of the Ottoman Empire, France, Britain and Sardinia against Tsarist Russia.
Most of the conflict occurred on the Crimean Peninsula, an important military position for the Russians, because their naval fleet could access the Mediterranean Sea from the region.
The immediate cause involved disputes over Orthodox holy places in Jerusalem and the rights of Orthodox, Christian minorities in the Holy Land, which were under occupation by the Ottoman Empire.
Nicholas I issued an ultimatum that the Orthodox subjects and the rights of the Eastern Orthodox Church of the crumbling Ottoman Empire be placed under his protection.
The French Emperor Napoleon III refused - he was promoting Catholic interests.
Britain attempted to mediate and arranged a compromise to which Nicholas I agreed.
When the Ottomans demanded changes, Nicholas I refused.
Having obtained promises of support from France and Britain, the Turkish, Ottoman Empire declared war on Russia in October 1853.

Charge of the Light Brigade

The Charge of the Light Brigade which took place during the Battle of Balaklava, on October 25, 1854 of the Crimean War, was part of the Siege of Sevastopol, Russia's principal naval base on the Black Sea.
The Light Brigade were the British light cavalry force with fast horses and soldiers armed with lances and sabres.
Through misinterpreted orders, the Light Brigade of 670 horsemen began a headlong charge into a treeless valley against the heavily defended Russian troops.
Of the 670 Light Brigade soldiers, about 110 were killed, 160 were wounded and approximately 375 horses were lost.
The legend of that mile-and-a-quarter-long charge was made famous by Alfred, Lord Tennyson in his 1855 poem to honor their bravery and sacrifice.
The poem's theme highlighted their gallant patriotism - "Honor the charge they made! Honor the Light Brigade, Noble six hundred!"

Conditions During the Crimean War

The loss of life in the war was staggering as many more soldiers died from diseases than from wounds.
Of the 1,650,000 Allied and Russian soldiers who participated in the war 900,000 died from diseases such as typhus, typhoid, cholera, and dysentery brought about by the terrible conditions.
The British base and army hospitals were primarily established in Scutari across the Bosporus from Constantinople (Istanbul), Turkey.
On October 21, 1854, Florence Nightingale led a team of 38 volunteer nurses that she trained, including her aunt Mai Smith and 15 Catholic nuns, to Selimiye Barrack Hospital in Scutari where they arrived on the 5th of November.
The first modern war correspondent, British journalist, William Howard Russell reported in the London Times, that soldiers were treated by an incompetent and ineffective medical establishment and that the most basic supplies were not available.
The British public raised an outcry and demanded the situation be improved.
Florence Nightingale described the conditions as the "Kingdom of Hell."
She found filthy conditions, overcrowding, overworked medical staff, no equipment to process food for the patients, defective sewers and lack of ventilation.
She immediately worked towards improving sanitation, nutrition, and activity for the patients and established standards of care.
She obtained supplies and equipment with funds provided by the London Times and enlisted soldiers' wives to assist with the laundry and to clean the wards, while basic care was provided by the nurses.
Attention was also given to psychological needs as well as educational and recreational activities.
Her efforts reduced the death rate by two-thirds with the introduction of such measures.
Throughout these difficult times she kept meticulous records of the number of deaths, and the causes of deaths, so that on her return to Great Britain she could justify the need for improving conditions in hospitals.

The Lady with the Lamp

Florence Nightingale's wandering through the wards at night, providing support to the patients earned her the title of "Lady with the Lamp."
The Times reported :"She is a "ministering angel" without any exaggeration in these hospitals, and as her slender form glides quietly along each corridor, every poor fellow's face softens with gratitude at the sight of her. When all the medical officers have retired for the night and silence and darkness have settled down upon those miles of prostrate sick, she may be observed alone, with a little lamp in her hand, making her solitary rounds".
Henry Wadsworth Longfellow's 1857 poem, "Santa Filomena," further popularized her outstanding efforts:
Lo! in that house of misery
A lady with a lamp I see
Pass through the glimmering gloom,
And flit from room to room.
In May 1855, she fell ill with "Crimean fever" (brucellosis), which she probably contracted from drinking contaminated milk.
The lingering effects of the disease were to last for 25 years, frequently confining her to bed because of severe chronic pain.

Russia sought peace in January 1856 with the loss of 500,000 troops, mostly to disease, malnutrition, and exposure.
On March 30, 1856, the Treaty of Paris ended the Crimean War.
Florence Nightingale returned to her home in Derbyshire on August 7, 1856, as a reluctant heroine.

Florence Nightingale laid the foundation of professional nursing with the establishment of her nursing school at St Thomas' Hospital in London (now part of King's College) in 1860.
The Nightingale Pledge taken by new nurses, and the Florence Nightingale Medal, the highest international distinction a nurse can achieve, were named in her honor.
The annual International Nurses Day is celebrated on her birthday.
She was also honored with the title of Lady of Grace of the Order of St. John of Jerusalem.
She also became the first woman to receive the Order of Merit.
On her death in 1910, she was honored with a memorial service at St. Paul's Cathedral, London and was buried in the family plot in St. Margaret's Church, East Wellow, Hampshire.