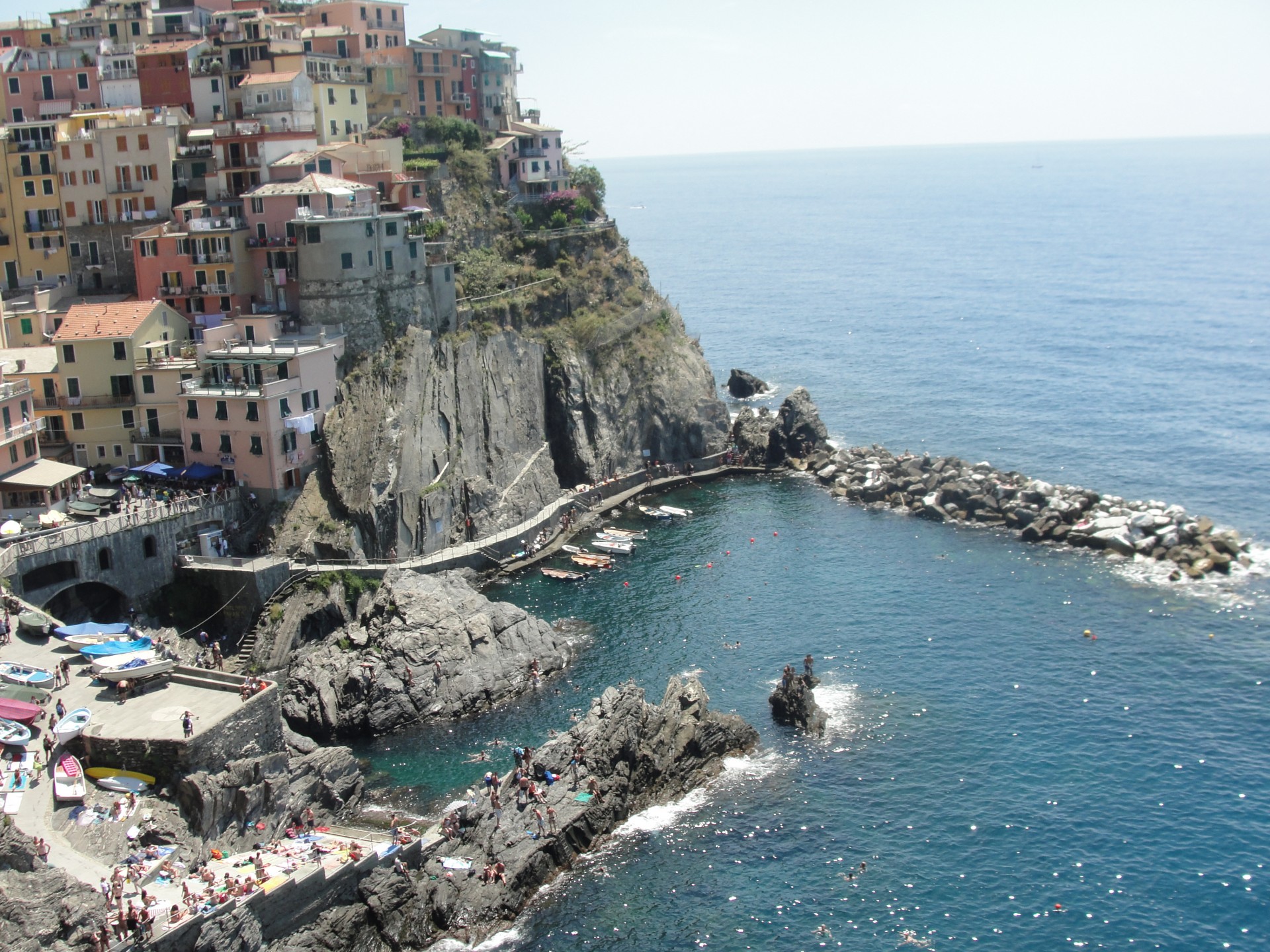 Cinque Terre (meaning "Five Lands") in the Liguria region and west of the city of La Spezia, comprises of five villages, the surrounding hills and a rugged coastline, which are all part of the UNESCO World Heritage listed Cinque Terre National Park (Parco Nazionale delle Cinque Terre).

No wonder the Italians refer to the area as “Terre tra cielo e mare,” or Land between Sky and Sea. 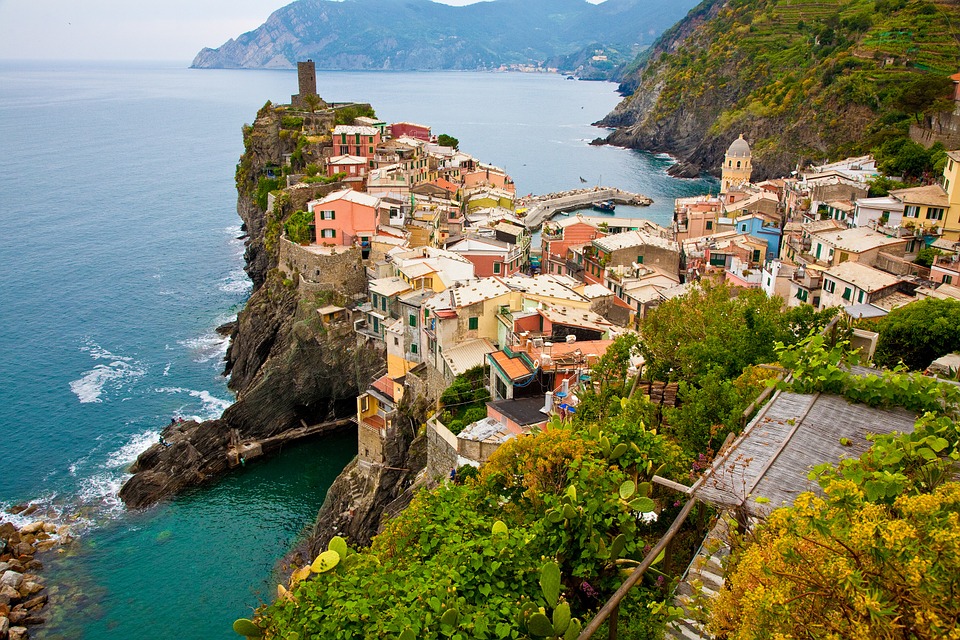 The Liguria area was a strategic coastline for the Roman Empire.

Saracens invaded the region in the 9th century and forced the people to flee into the surrounding hills.

The Tuscan Obertengo family ousted the Saracens in the 11th century and the locals were able to return and re-build their houses.

Over the years they turned the steep cliffs into cultivated terraces with vineyards and olive groves.

In the 12th century, the region became part of the Republic of Genoa and, by the 15th century the name "Cinque Terre" was first used.

From the 16th century the villages were walled and forts with defence towers were built  to defend the area from the constant pirate attacks.

In 1870, Italy was unified and rail lines were built including the coastal line between Genoa and Rome that passed through the region.

When the winding coastal road was completed in the 1960s, it offered stunning views over the villages, the countryside and the sea.

Since the 1970's, the breathtaking beauties of the region have paid paid big dividends for the area through tourism.

In 1997, the area became a UNESCO World Heritage site and in 1999, Cinque Terre National Park was founded. 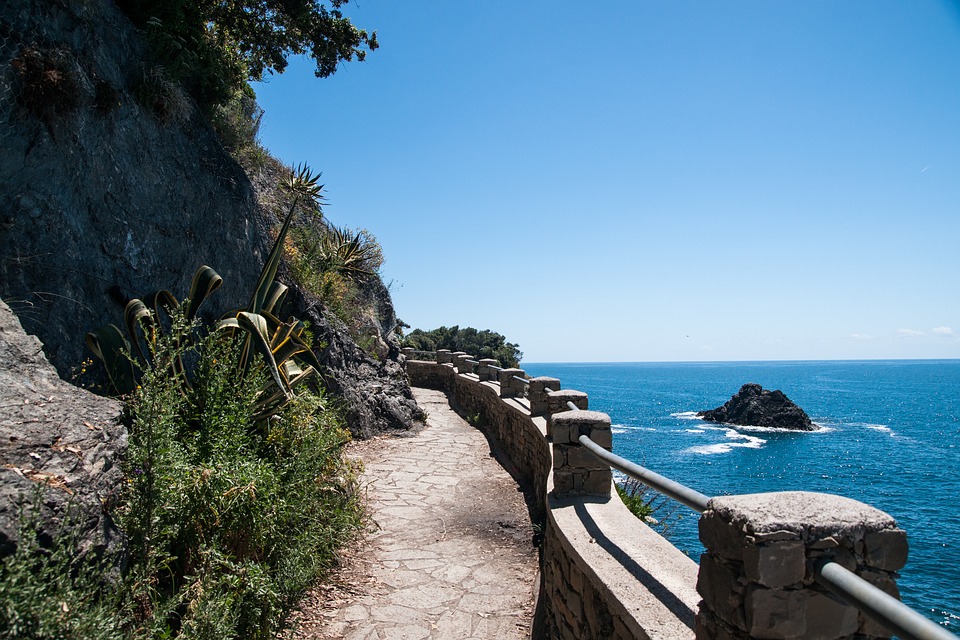 Over the centuries the villages and hinterland of the region were only accessible by sea or mule paths.

These mule paths today, offer some of the best hiking trails in Italy.

Because they are now a part of the national park system you have to buy a card that is available at all railway stations, tourist information centers and from bus drivers of the villages or stations in La Spezia and Levanto.

There are two types of cards:

The other does not provide train service.

Local trains connect all five towns since road access and parking there are limited.

Intercity trains connect the villages to Milan, Rome, Turin and Tuscany and a ferry plys between them except Corniglia.

If you travel to the region by car, park at La Spezia then, take the train.

The Mediterranean provides seafood in abundance and the anchovies of Monterosso are a specialty designated with a Protected Designation of Origin status from the European Union.

Pesto is a popular sauce of the region made from basil leaves, garlic, salt, olive oil, pine nuts and pecorino cheese.

The locally baked focaccia bread is popular and Farinata pancakes made from chick pea flour can be bought in bakeries and pizzerias,

Corniglia is famous for its gelato made from local honey (miele di Corniglia).

The Cinque Terre and Sciachetrà are two wines from the region using Bosco, Albarola, and Vermentino grapes.

Grappa, a brandy made with the pomace left from wine-making and limoncello, a sweet lemon flavored liqueur are also popular. 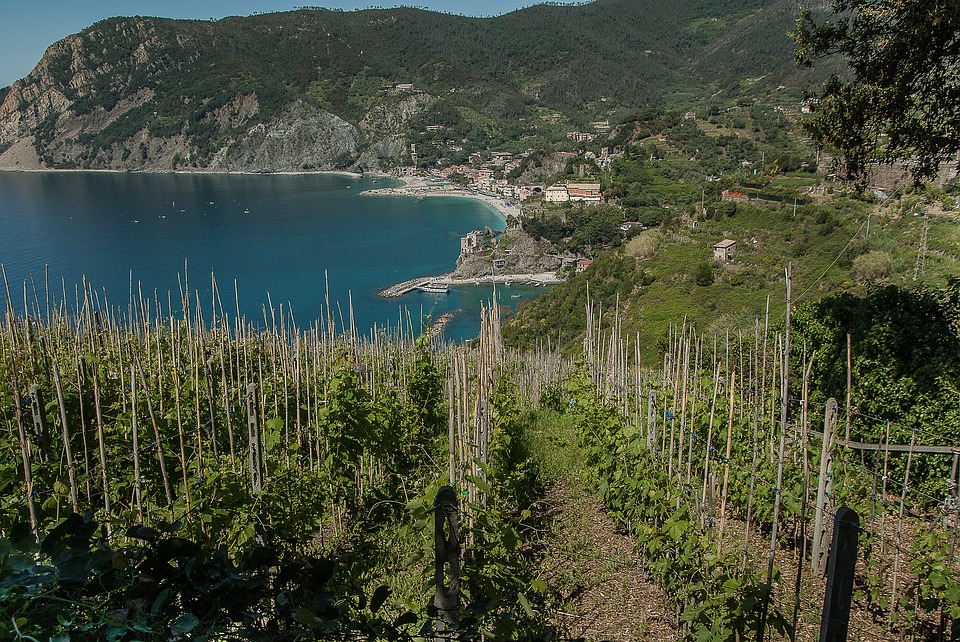 Monterosso al Mare is divided into the old and new town with a tunnel catering to pedestrians and the few cars.

The best way to go to Monterosso is to take the local trains from La Spezia or Genoa or Intercity trains from Milan, Rome, Turin, and Tuscany. 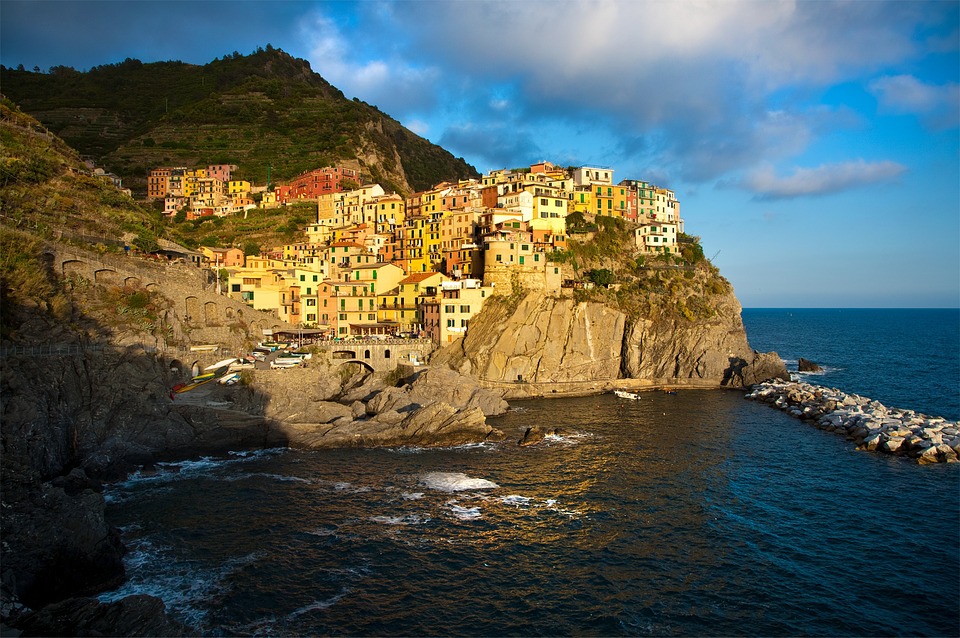 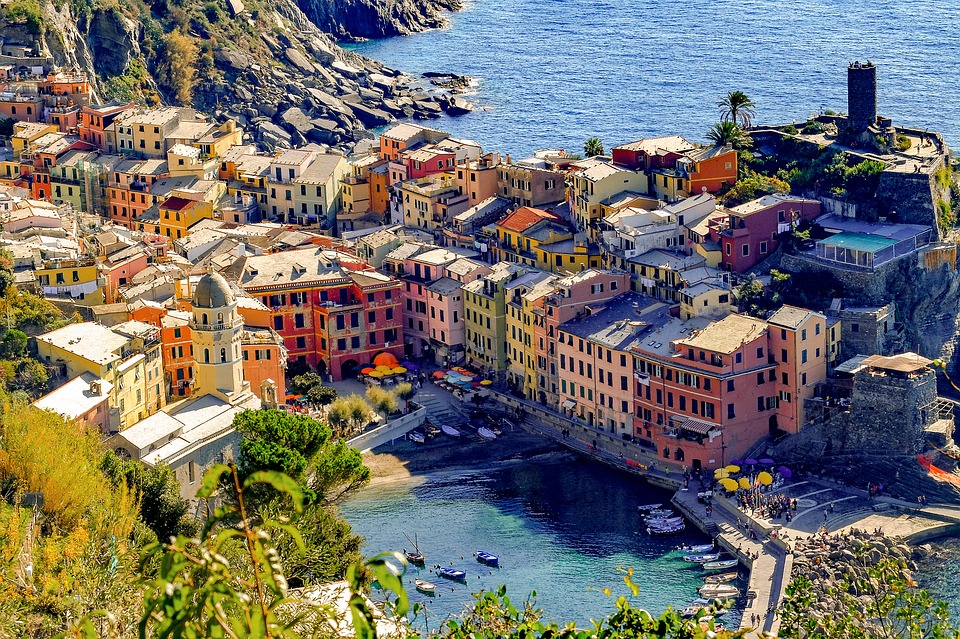 Vernazza has no car traffic and has the only natural port of the region.

Vernazza was first recognized as a fortified town in 1080 while records document the presence of the parish of San Pietro in 1267 and of Santa Margherita d'Antiochia of Vernazza in 1318.

Although tourism has taken over in Vernazza fishing, wine and olive oil production still continue. 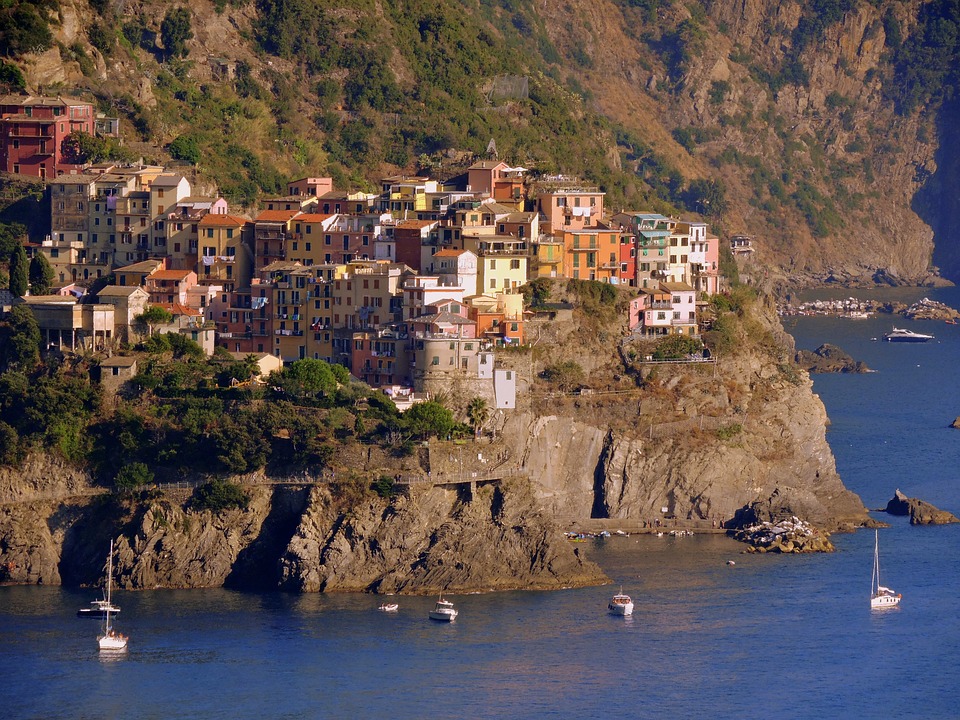 Corniglia dates back to the Roman Age.

All the other four villages can be seen from here.

To reach the village you can either climb the Lardarina steps or take the road from the railway station that leads to the village.

The ruins of Genoese fortifications on a cliff date back to around 1556. 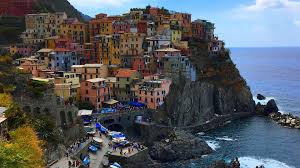 Manarola has traditionally been a fishing and wine-making village.

Sciacchetrà the local wine is renowned and referenced from Roman writings for its high quality. 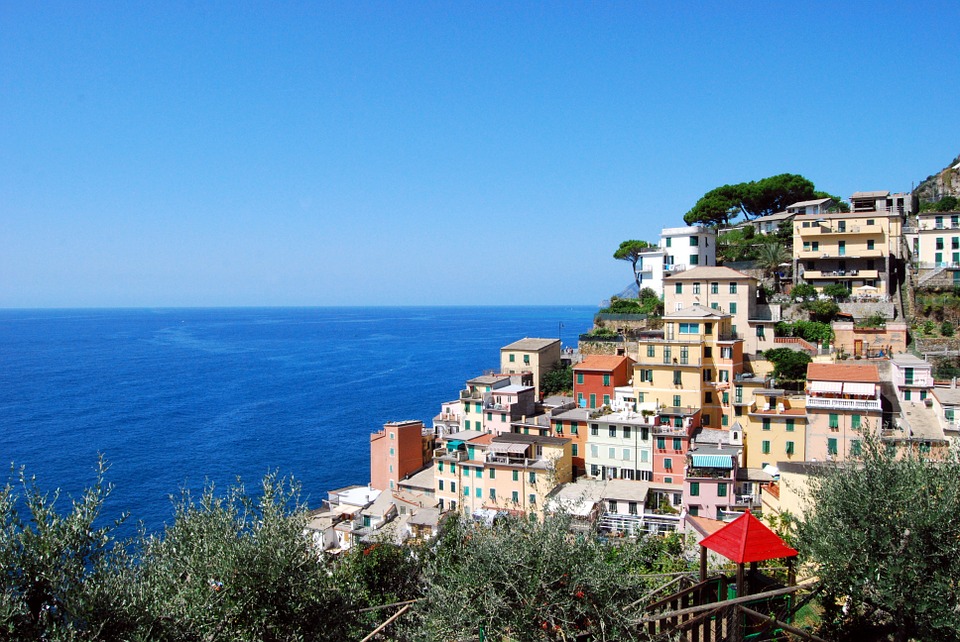 Riomaggiore, in the Riviera di Levante region dates back to the early 13th century and is known for its history and for its wine.

Via Colombo, the main street is where you will find popular restaurants, bars and shops.

The Via dell'Amore path connects Riomaggiore to Manarola. 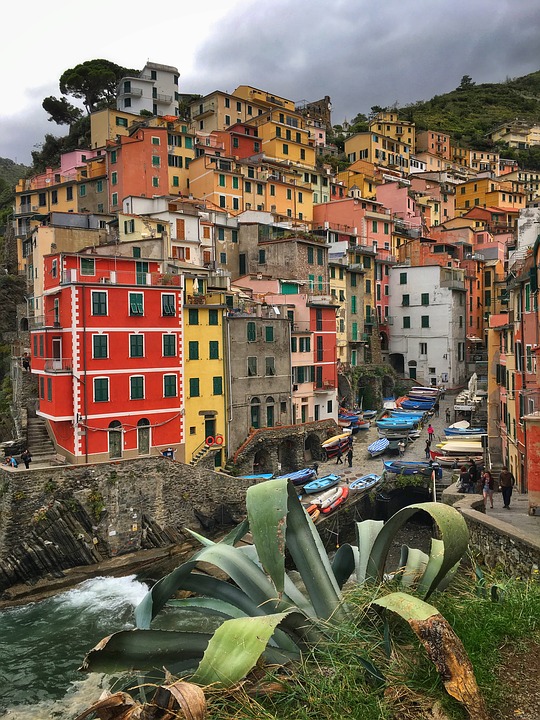