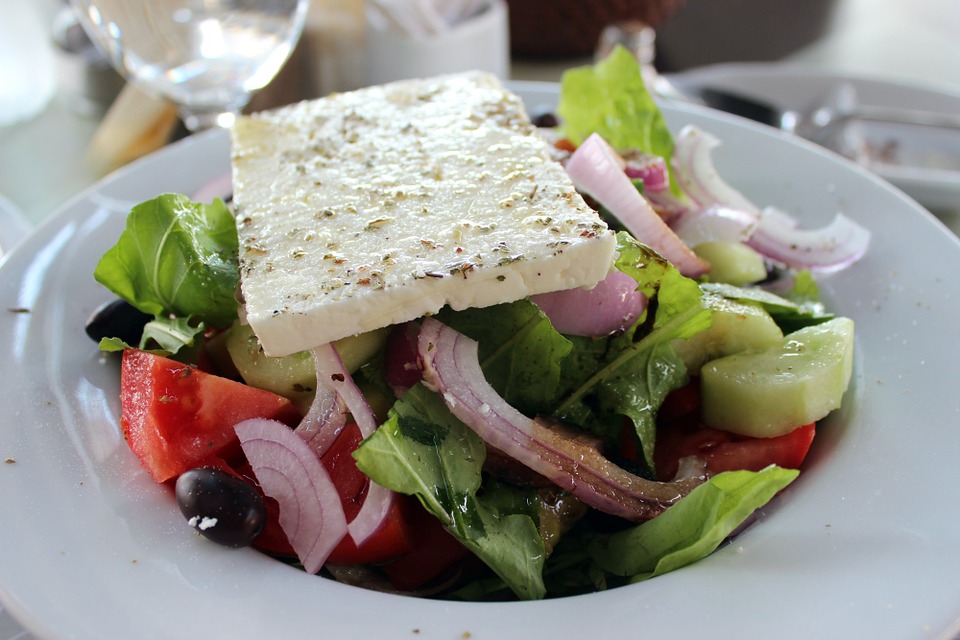 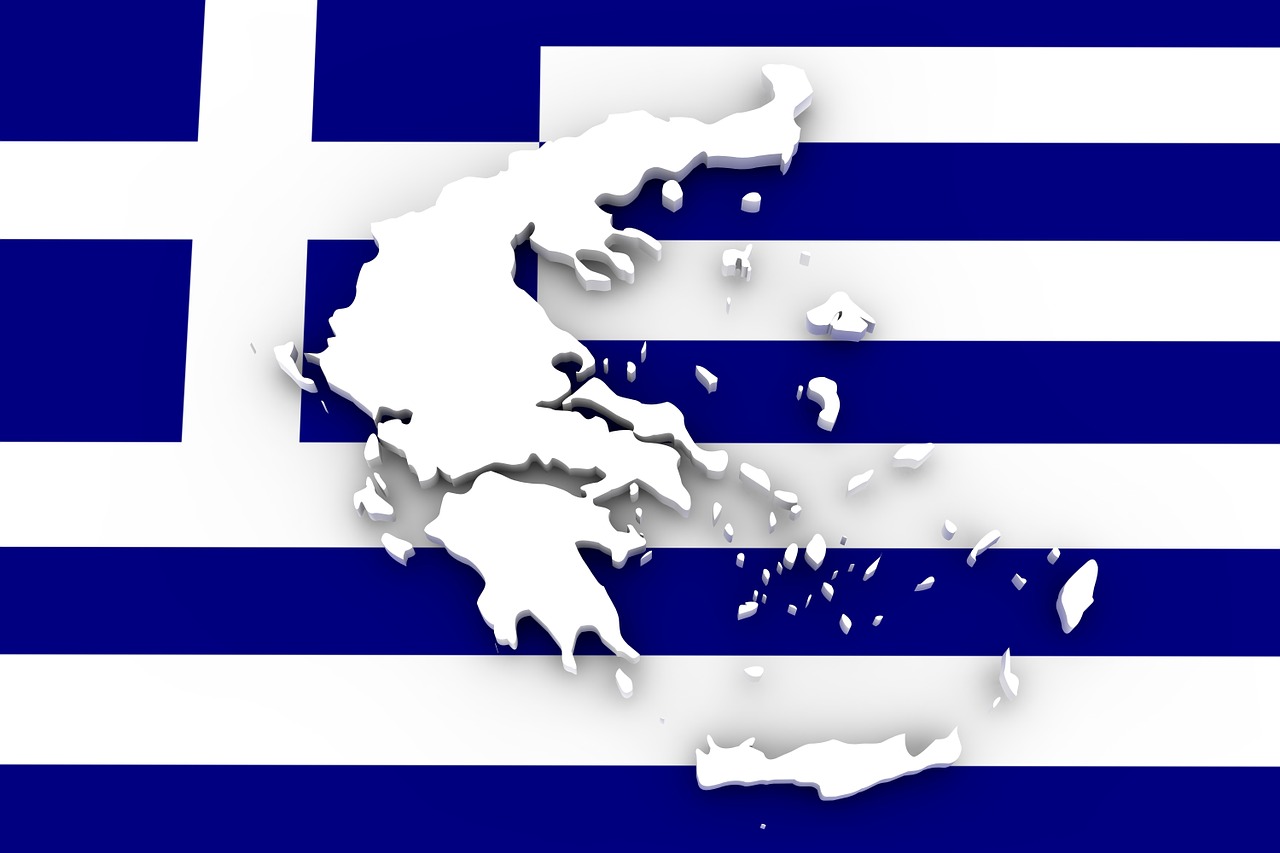 History of Greek Cheeses
Greek cheeses are an important part of the Greek cuisine.
Agriculture and animal breeding has been a very important part from the ancient Greek era as they kept sheep and goats for their meat, milk, fiber and skins.
From the milk of those animals they made cheese, butter and yogurt.
Ripened and salted cheese was used in cooking and for making all sorts of sweet cheese pastries of which many survive to this day in the Aegean islands.
And they enjoyed eating cheese with honey and fresh fruits.
Ancient Greek literature and archeological excavations reveal stone tablets depicting cheese making from goat and sheep’s milk at the Minoan Palace of Knossos in Crete.
From ancient Greek mythology we learn that Aristaios, the son of Apollo, taught the art of cheese-making to humans and cheese offerings to the gods.
In Ancient Athens cheese making recipes were developed and cheese was sold in the market.
By Roman times cheese making in Greece had become an art.
Cheese making and cheese was the daily meal of poor people during Byzantium years.
People would travel to the mountainous areas exchanging their cheese making techniques.
Over the centuries, each Greek region developed its own unique cheese recipes and own local cheese production. Your first paragraph ...

From Online Business to Brick-and-Mortar: How to Leave Your Competition in the Dust(Part I)

There are about 1,800 different types of cheeses produced in the world.
The United States accounts for 30% of world production with more than 300 varieties produced, largely from cow's milk while France is the biggest exporter.
Global cheese consumption has dramatically increased due to the westernization of South East Asia's dietary habits and rising living standards.
Greek cheeses are produced exclusively in designated areas of Greece to protect regional foods and thus have been standardized as Protected Designation of Origin (PDO) products which came into force in 1992.
Protected designation of origin (PDO) identifies products that are produced, processed and prepared in a specific geographical area, using traditional methods of the production procedure and ingredients.
Only cheese made in Lesvos, Macedonia, Thessaly, Thrace, central mainland Greece, and the Peloponnese can be called feta.
Greece has 19 PDO cheese types, certified by the European Union defining their areas of origin and methods of production.
Feta received the protected designation of origin (PDO) in 2002 for a white cheese soaked in brine, originating in Greece.
Greek cheeses containing cow's milk that have PDO status are Graviera Naxos, San Michali and Metsovone (also contains sheep's milk).

Fully Booked! How to Make Your Offline Business Profitable from Day One (Part II) 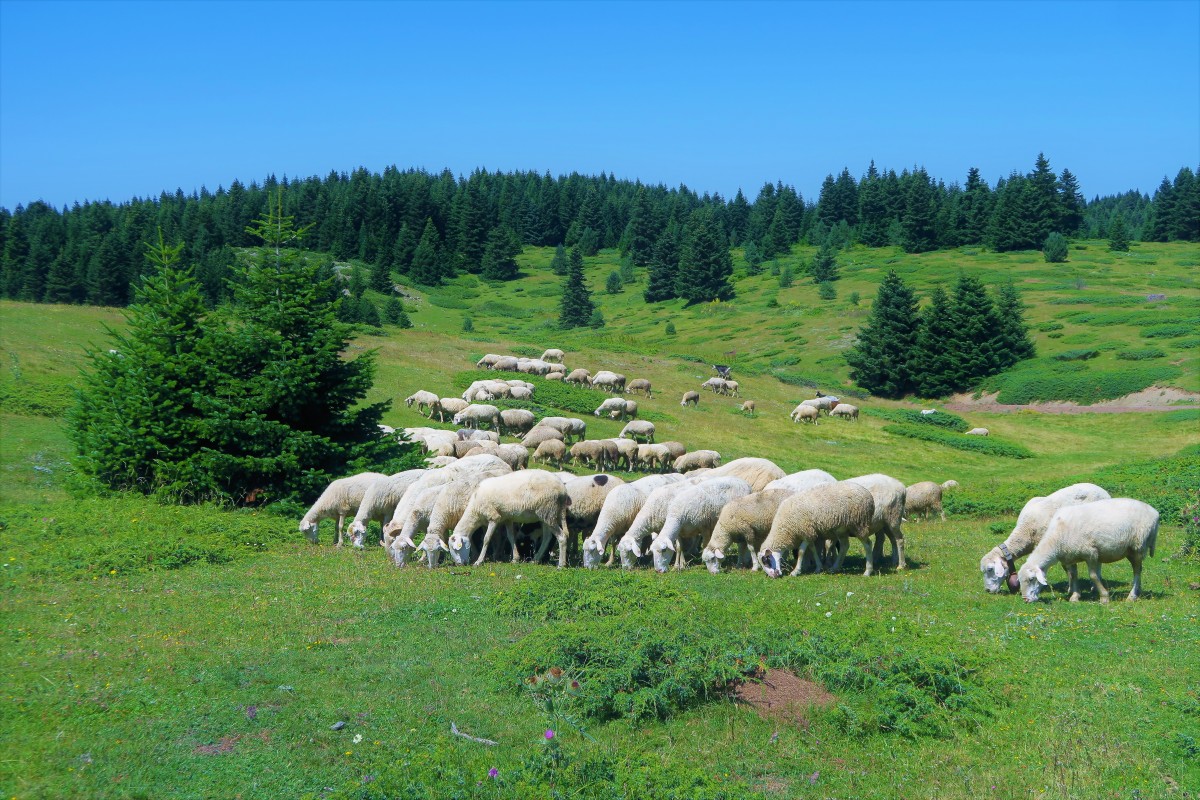 Generally, Greek cheeses are made from sheep or  goat's milk or a combination of the two.
Sheep’s milk cheese is higher in fat and double the protein than goat’s milk cheese and has calcium, iron, magnesium, zinc, thiamine, riboflavin, as well as vitamins A, E, K, B6, B3 (niacin) B12 and D.
It also contains all 10 of the essential amino acids.
Sheep milk products are thought to lead to longevity as noted by Bulgarian shepherds who enjoy long lives from eating the produce of their sheep.
Some of the most popular sheep cheeses include feta (Greece), ricotta (Italy), and Roquefort (France).
Over 65% of the world's population drinks goat milk.
Its easier to digest and provides a solution for some people with lactose sensitivity.
Goat's milk is also, packed with beneficial fatty acids, vitamins, calcium and other minerals. 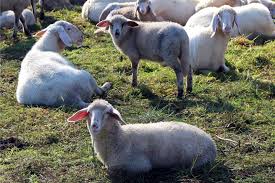 Greek cheeses are considered among the finest in the world.
Greece produces approximately 70 varieties of cheese.
Every region of Greece historically, has its own specialty cheese production, especially in mountainous areas and the islands based on traditional recipes.
Most are made with sheep or goat milk, or a combination of the two.
Cow’s milk cheeses are only made on some Greek islands because the mountainous Greek terrain generally favors the farming of sheep and goats.
From the mild and creamy to strong and salty, here are seven varieties.
Saganaki
Cheese used in cheese saganaki is usually graviera, kefalograviera, halloumi, kasseri, kefalotyri, or sheep's milk feta cheese.
Saganaki is any one of a variety of dishes prepared for the frying pan in which they are prepared.
The cheese is melted in a small frying pan until it is bubbling and generally served with lemon juice and pepper and eaten with bread. 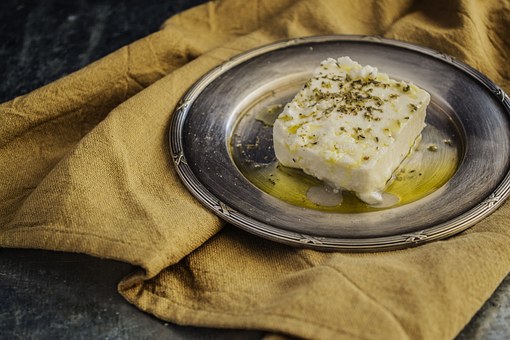 Feta
Of all the Greek cheeses,Feta is the national cheese of Greece and its most famous.
Only sheep and goat's milk (with a maximum of 30% goat milk) can be used to make feta as the soft, white, rindless squared  cheese.
Feta is stored in barrels filled with brine (salt and water) for a minimum of 2 months and up to 12 months.
Feta cheese was first mentioned in a Byzantine poem of the 11th century as prosphatos ('recent, fresh') being produced on the island of Crete.
In the late 15th century, Pietro Casola, an Italian visitor to Heraklion in Crete describes the production and storage in brine of feta.   The name Feta, originated in the 17th century, which refers to the slicing of cheese.
Feta contains high levels of phosphorus and calcium which has been linked to improved bone density and osteoporosis prevention.
It is also nutrient-rich with vitamins A and C, as well as potassium, iron as well as phytonutrients and antioxidants.
It can be used in salads, desserts, baked goods, casseroles, mezethes and as a table cheese to saganaki or simply slice a piece of feta, add olive oil, sprinkle oregano over it and enjoy eating it with bread and olives.
The traditional Greek salad with tomatoes, cucumber, bell peppers, onions and olives would not be complete without the creamy feta cheese.
Myzithra
Myzithra is a mixed milk-whey cheese from sheep or goats, or both.
It is primarily produced on the island of Crete but is widespread throughout Greece and is sold as a fresh cheese, similar to Italian ricotta.
Fresh and sour myzithra are used to make Greek cheesecake and sweet cheese pastries or added to cooked dishes that call for cheese.
Aged myzithra is used as a grating cheese for pasta dishes, soups, and vegetable casserole dishes.
Kefalograviera
Kefalograviera is a hard yellow cheese made from pasteurized sheep and goat's milk or a combination of both.
It has a salty flavor and is a good source of protein, calcium, and low in fat.
It's formed in small wheels and aged for three months then, packaged in rounds, half-rounds, wedges and vacuum-packed.
It is an excellent cheese for grating or used as a topping for pasta dishes.
Kefalograviera is made in three areas designated as protected designations of origin (PDOs) in Western Macedonia, Epirus, and Aitoloakarnania.
Kefalotyri
Kefalotyri is a hard, salty white cheese made from sheep or goat's milk (or both) in Greece and Cyprus and can be eaten as is, fried in olive oil as saganaki, or added to foods such as pasta, meat, cooked vegetables, and for grating.
Young cheeses take two to three months to ripen.
Aged kefalotyri is drier with a stronger flavor and may be eaten as a meze (appetizer) or grated on food.
Kasseri
Kasseri has been produced in Greece since the 19th century and belongs to the family of pasta filata cheeses.
It is a traditional, medium-hard to hard pale yellow cheese with a hard-rind made from unpasteurized sheep milk with no more than 20% goat’s milk mixed in.
Cow’s milk may also be added, but only up to 10% of the total amount of milk.
It gained Protected Designation of Origin status in 1996 in the Greek provinces of Thessaly, Macedonia, Lesbos and Xanthi.
Kasseri requires at least three months to ripen but, generally left for six to twelve months to mature.
Its mild, buttery taste makes it an excellent table cheese and is often served sliced in sandwiches or pizzas, omelets, pastries or simply eaten with bread and olives. Aged kasseri cheese is rich in Vitamin K2 and contains a fat content of between 25% to 45%.
Ladotyri Mytilinis
Ladotyri means "oil cheese" in Greek and has a Protected Designation of Origin (PDO) status.
Ladotyri Mytilinis is a hard table cheese traditionally preserved in extra virgin olive oil and made on the Greek island of Lesbos.
It has been produced since ancient times and is made with a combination of sheep and goat milk which must not exceed 30%.
Ladotyri Mytilinis is enjoyed with salads or simply eaten with chunks of bread dipped in olive oil and olives.
Manouri
Manouri, also known as Manoypi, is a fresh white whey cheese made from goat or sheep milk as a by-product following the production of feta.
Manouri has PDO status and is produced primarily in Thessalia and Macedonia in central and northern Greece.
Manouri is a creamy, semi-soft,  mild cheese and is used in salads, pasta, and spanakopita or drizzled with honey.
It can also be eaten as a dessert cheese or substituted for cream cheese in cheesecakes is used in pastries
Graviera
Graviera is a cheese made in wheels and  produced in various parts of Greece that include Crete, Lesbos, Naxos and Amfilochia.
Graviera of Crete is made from sheep’s milk and ripened for at least five months whereas the graviera of Naxos is mostly made of cow's milk (80-100%).
It can be sliced and eaten, fried as saganaki or eaten as a snack, grated over pasta, baked in a casserole or used in salads.
Kopanisti
Kopanisti is a creamy, salty cheese made from sheep’s milk, goat’s milk or a combination of both.
It is also made from cow’s milk.
Its spicy taste comes from the fungal growth that occurs with this cheese.
It has protected designation of origin (PDO) produced in the Greek islands such as Mykonos, Tinos, Andros, Syros and Naxos.
In Mykonos, it has been produced for more than 300 years. 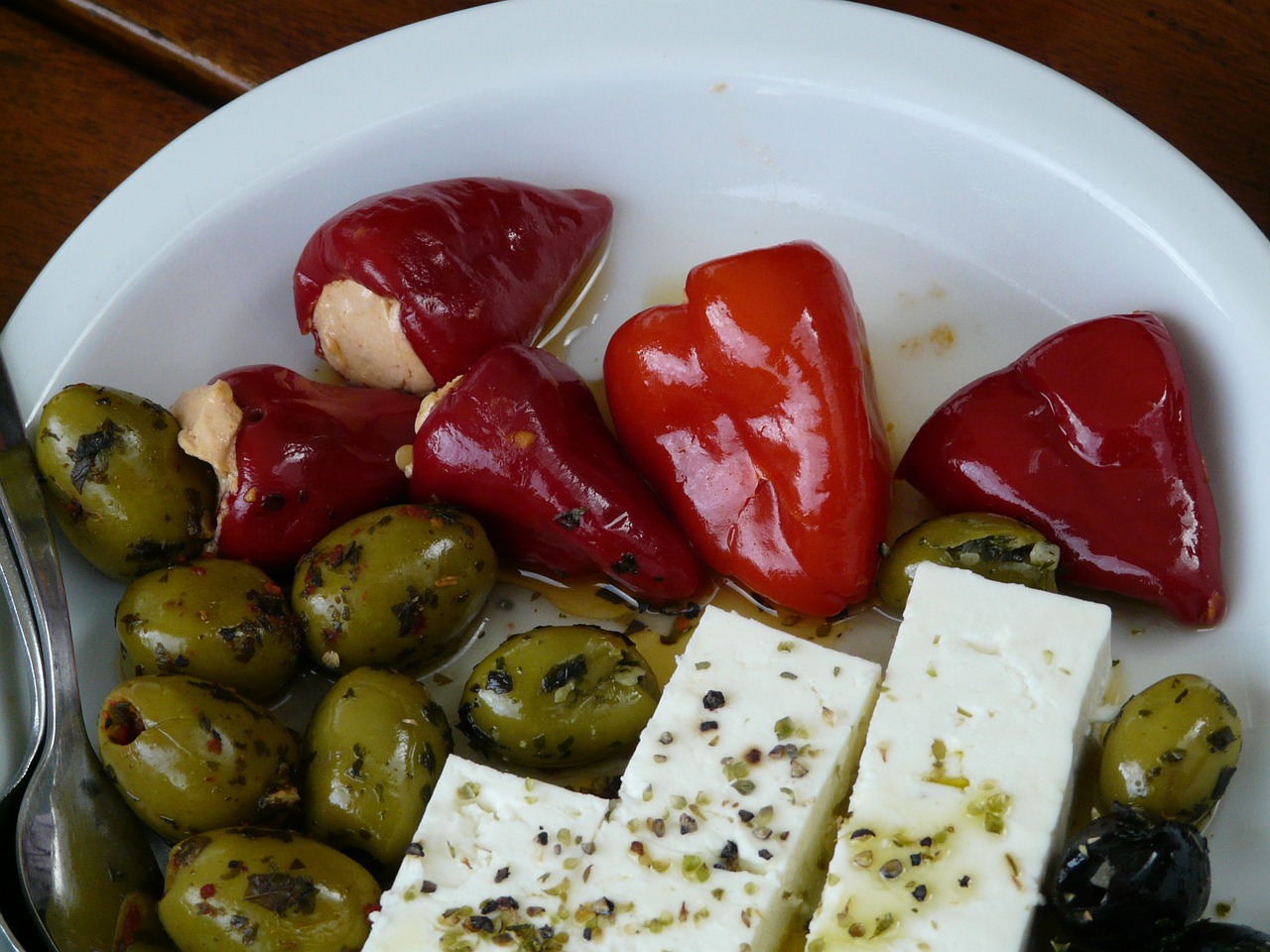