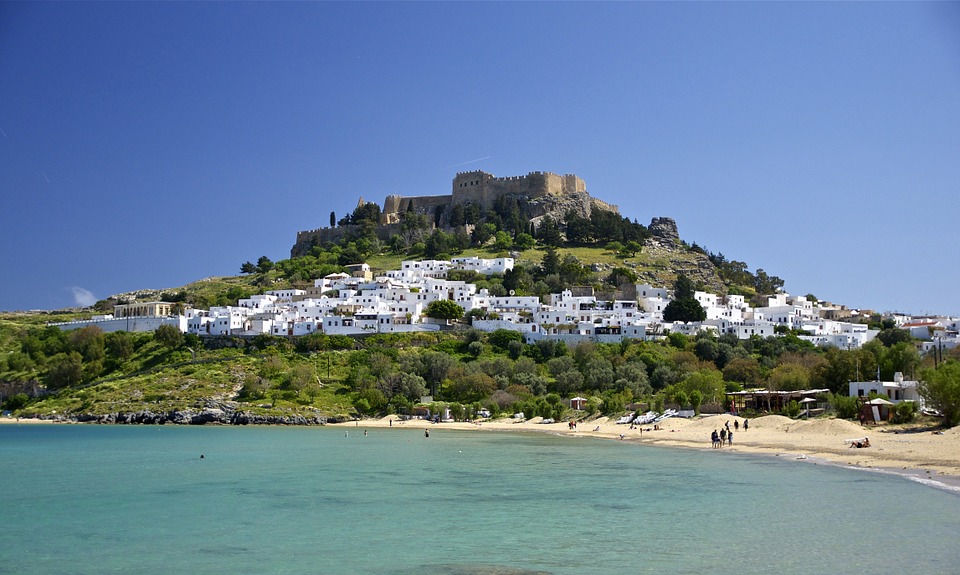 Lindos is just one of the many reasons why Rhodes Island is one of the most popular island's of the Mediterranean.

The picturesque, historic town is situated by a large bay and across from the fishing and resort village of Charakii and 50 kilometers from the town of Rhodes.

Here, you can explore history and enjoy the breathtaking views from its Acropolis that is only surpassed by the world famous, Acropolis of Athens.

The ancient, fortified Acropolis perched on a 105 m. (350 ft) high rock offers panoramic views of the town and its scenic coastline, beaches, bays and coves.

The Acropolis and the town are just two of the most visited sites of Rhodes many wonderful attractions. 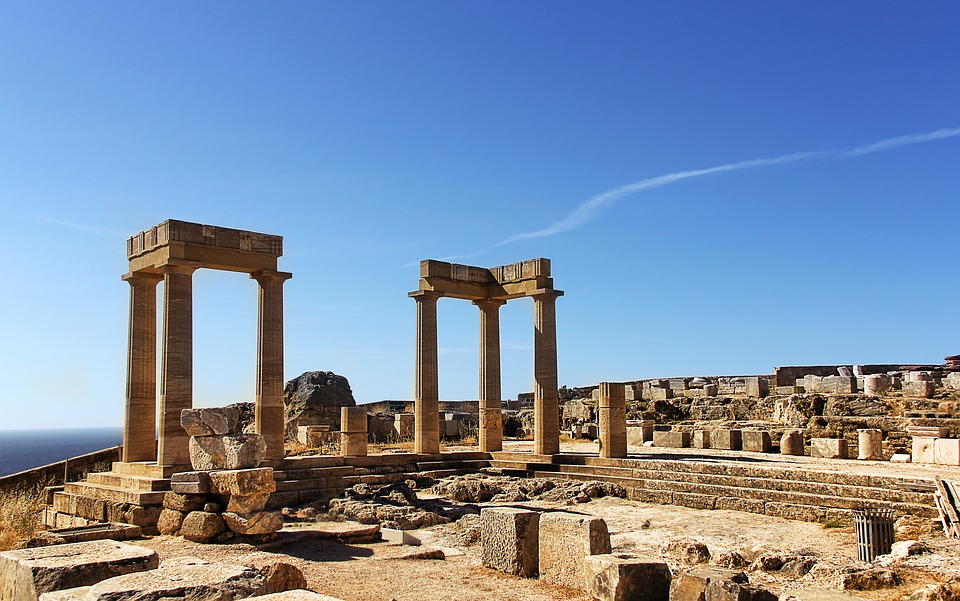 Lindos was founded by the Dorians about the 10th century BC and was one of six cities known as the Dorian Hexapolis.

Along with the two other ancient Doric cities of Iallysos and Kamerios on the island, they were once powerful international trading forces throughout Europe and Asia Minor.

It was ancient Lindos, Iallysos and Kamerios that founded the city of Rodos (Rhodes) in 408 BC.

Rhodes was to become renowned throughout the then known world for its beauty and for the famous Colossus of Rhodes, one of the Seven Ancient Wonders.

Here also, is where Saint Paul the Apostle first landed around the mid-1st century AD to convert the people to Christianity.

The monastery at Saint Paul's Bay, south of the Acropolis is dedicated  to the Apostle and today, it is a popular wedding venue for people from around the world. 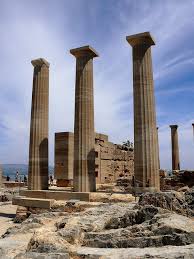 The ancient Acropolis with its Hellenistic staircase, walls and towers is built around the natural conformation of the rock.

The Doric Temple of Athena Lindia, dates from about 300 BC

The Propylaea of the Sanctuary dates from the 4th century BC.

During the 14th century a fortress was built on the Acropolis by the Knights of St John to defend the island against the Ottomans.

And, some of the scenes from the Hollywood movie, The Guns of Navarone starring, Gregory Peck, David Niven and Anthony Quinn were filmed on the Acropolis.

Church of the Panagia

The beautiful cross-shaped Byzantine Church of Panagia with its octagonal dome and towering, stone-built bell tower is dedicated to our Blessed Virgin Mary.

Originally built in 1300, the church has gone through various phases of renovation and reconstruction throughout the centuries.

Significant changes were also made by the Grand Master, Pierre d’Aubusson between 1467-1503 during the Knights of Saint John period.

Lindos is also famous for its wonderful Captains’ Houses built during the 16th and 17th centuries by wealthy merchant seafarers.

The Captain's Houses with their high walls, courtyards and hokhlaki pebble floors, are reminders of the island's rich historical past. 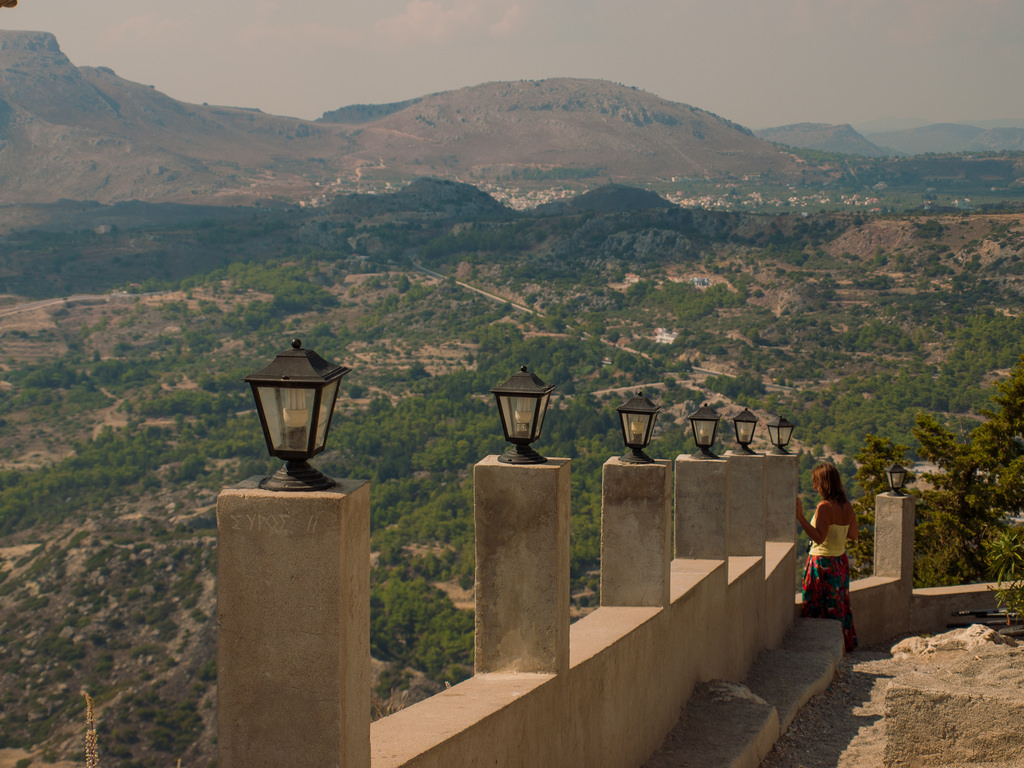 The old Byzantine Tsambika Monastery, situated about 26km from Rhodes Town between the villages of Kolymbia and Archangelos, is dedicated to our Blessed Virgin Mary.

Perched about 300 metres on a hill, it offers stunning coastal views over Tsambika beach, Kolymbia and Lindos.

There is also the new Tsambika Monastery located on the road that leads out from Rhodes Town and near the village of Archangelos.

To get to the old monastery, you can drive half way up the hill then, walk to the top following 350 steps.

There are countless testimonials of many women who have in fact, been blessed with a child after visiting the monastery and praying to the icon of Panagia Tsambika

If the child born is a boy, he is named Tsambikos or Tsambika if its a girl.

Tsambiko and Tsambika are names that are unique on Rhodes Island.

Feast Day for Panagia Tsambika is September 7th and 8th.

Saint Paul, the Apostle brought Christianity to Rhodes Island in the mid-1st century. 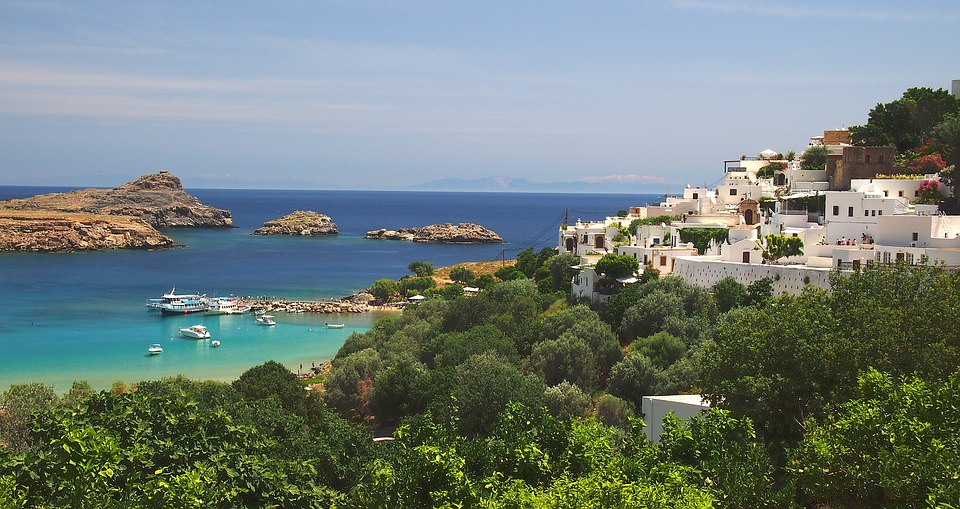 The historic island of Rhodes offers the visitor visible reminders of its long and turbulent past from the glory the ancient Greeks to Romans, Byzantines, Genoese, Venetians, Crusader Knights, Ottomans and Italians.

As you walk through its cobbled, winding streets and alleyways, you will find many stalls and shops selling porcelain, traditional embroideries, woven rugs, jewelery, pottery and paintings as well as restaurants, tavernas and bars that cater for all tastes.

You can visit Lindos by tourist coach, hire car or ferry from the town of Rhodes.