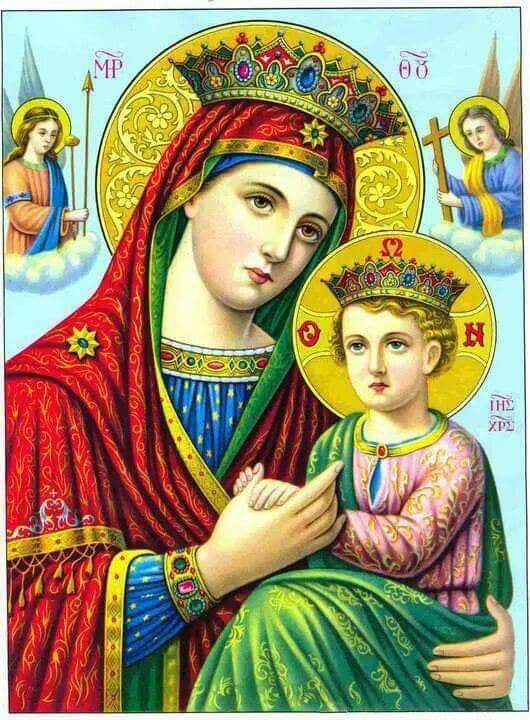 The Virgin Mary is the Theotokos (God Bearer) who gave Birth to the Son of God, our Savior.
To the Greek Orthodox faithful she is also the Panayia, meaning “all-holy.”
Theotokos (Θεοτόκος) is made up of two Greek words Θεός "God" and τόκος "childbirth ('Mother of God' - Luke 1:43)
In Christianity, she is not only the mother of Jesus Christ but also the mother of all humanity.
The title Theotokos that is used by Orthodox Christians and Byzantine tradition, was recognized at the Third Ecumenical Council at Ephesus, Asia Minor in 431 AD because she gave Birth to Christ Who is fully human and fully Divine.
A Byzantine hymn summarizes this truth, “He whom the entire universe could not contain was contained within your womb, O Theotokos.”
The Virgin Mary is venerated by Orthodox Christians as the holiest and greatest Saint because she is the ultimate symbol of motherhood and for her virtues of humility, purity, modesty, faith and trust that Glorified God.
She was chosen to be the mother of the Son of God because she was free from all sin through God's Divine Grace.

Birth of the Virgin Mary 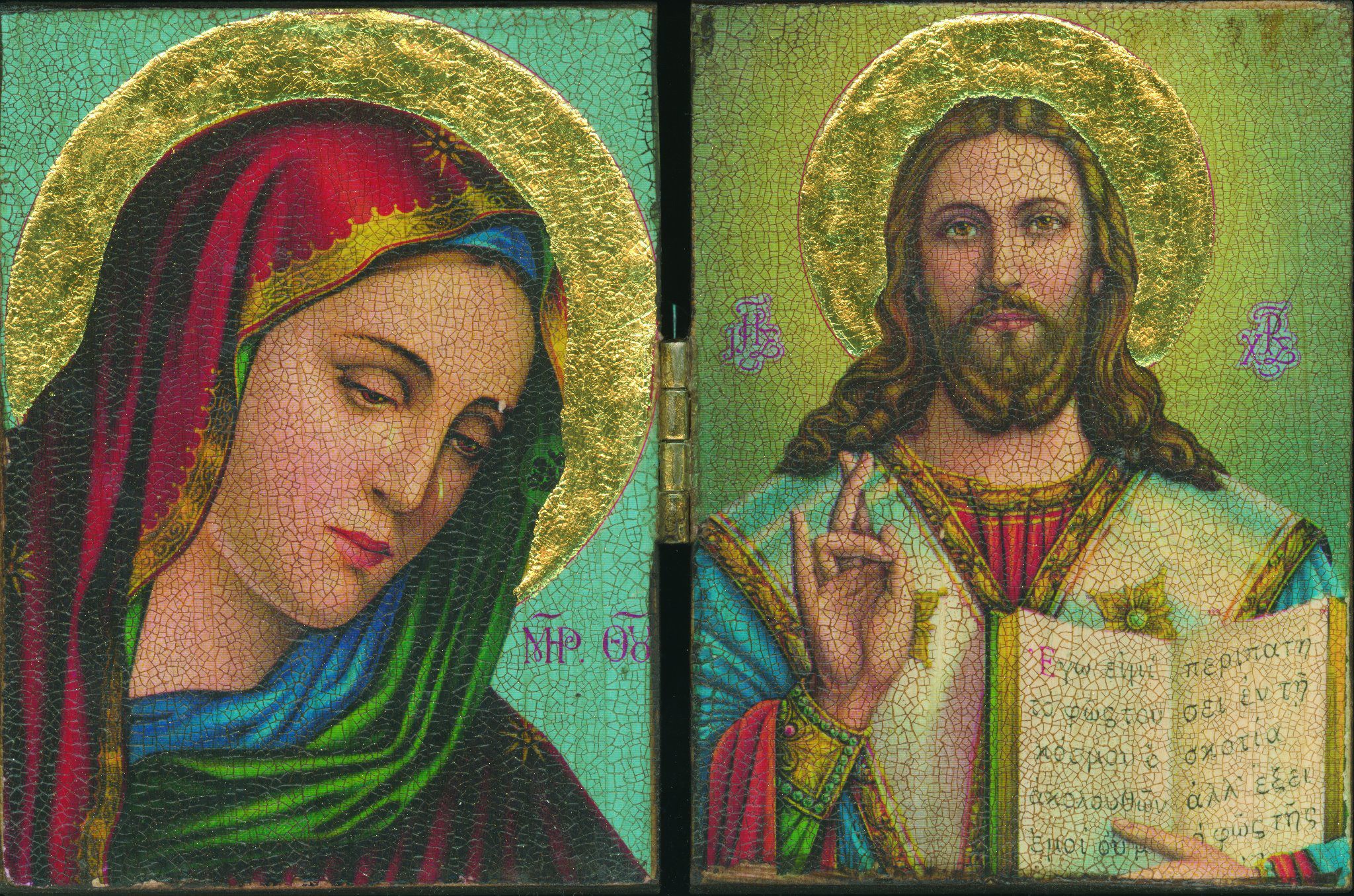 Mary's parents were Saint Anne and Saint Joachim who lived devout lives at Nazareth.
Anne was the the maternal grandmother of Jesus.
Anne lamented that she could not bear a child and promised God that she would dedicate her first-born child to the Lord’s service.
The couple then received a vision of an angel, who announced that Anne would conceive and bear a most wondrous child.
They rejoiced at the birth of their daughter, whom Anne named Mary.
At the age of three, Joachim and Anne, fulfilled their Divine promise by taking Mary to the Temple of Jerusalem, where they left her to be brought up.
Through her marriage with Joseph, Mary and her Son Jesus, became a part of the House of David (the Tribe of Judah).

Nativity of the Theotokos 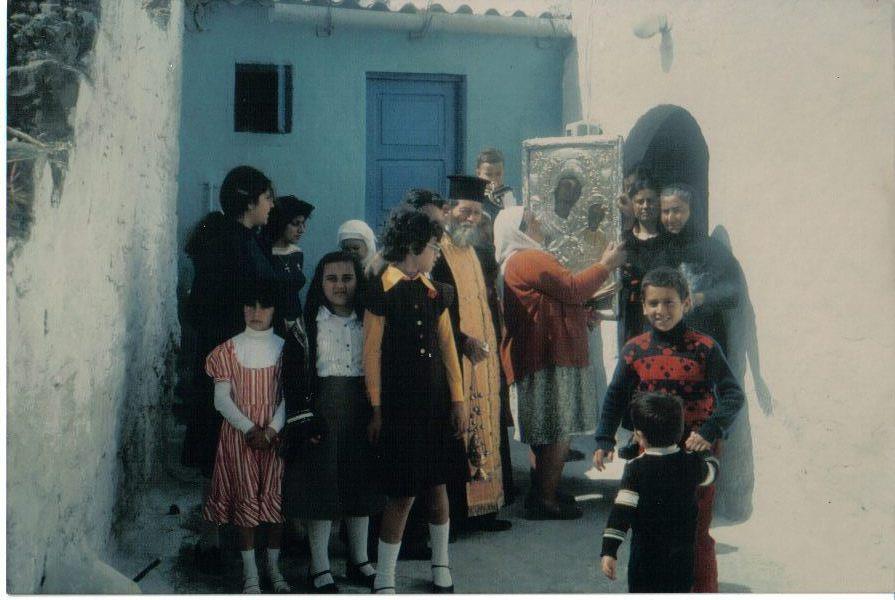 8th of September
The Feast of the Nativity of the Theotokos is celebrated each year on the 8th of September.
It is an Orthodox Christian Feast Day celebrating the birth of Mary, mother of Jesus.
Feasts remind all Christians to put God at the heart of everything they do.

Mary's name in the New Testament was based on her original Aramaic name, Maryam or Mariam.
It was the most popular female name among Jews of that era.
The English name Mary comes from the Greek Maria (Μαρία - Μαριάμ).
Both Μαρία and Μαριάμ appear 54 times in the New Testament. 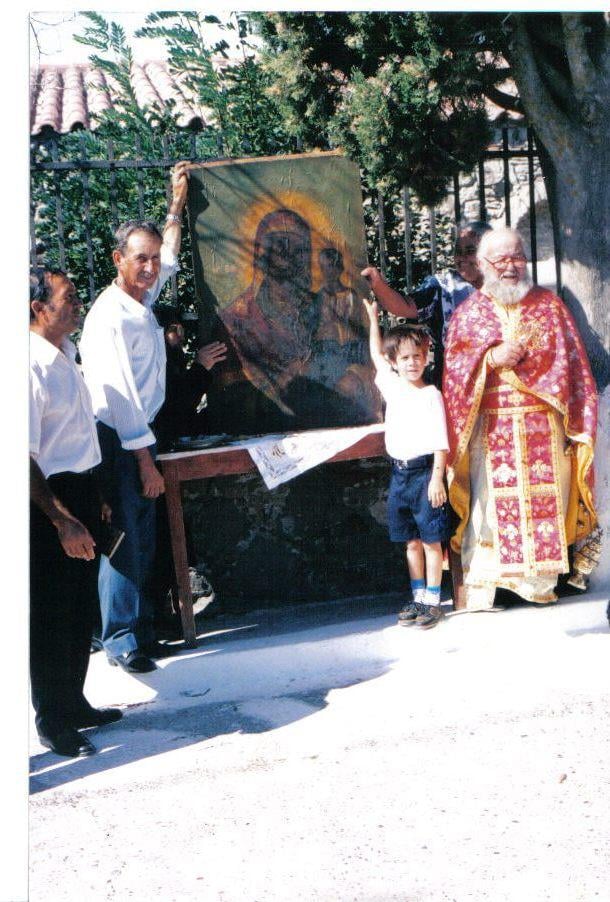 The Virgin Mary has always been a central figure in Christianity from the moment she was told, "Blessed are thou amongst women" by the Archangel Gabriel.
Our salvation comes in being united to Jesus Christ, our Lord and Savior.
We honor the Theotokos as the greatest and holiest of all Saints because of her union with Christ.
Those who seek solace and spiritual guidance ask for her intercession through prayer.
In quiet humility they light their candles and pray to the Blessed Virgin Mary.
Their faith gives them strength and inspiration through a spiritual sense of connection to a Higher Power.
That Higher Power is God. 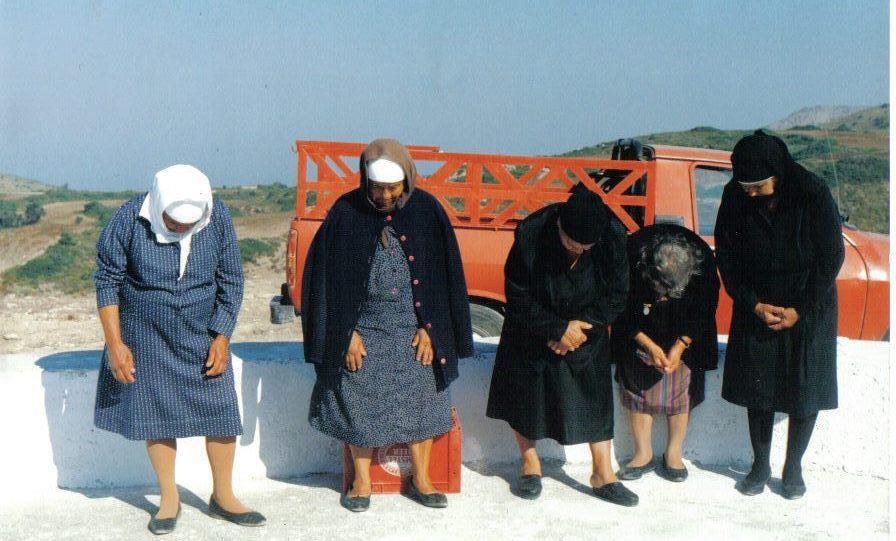 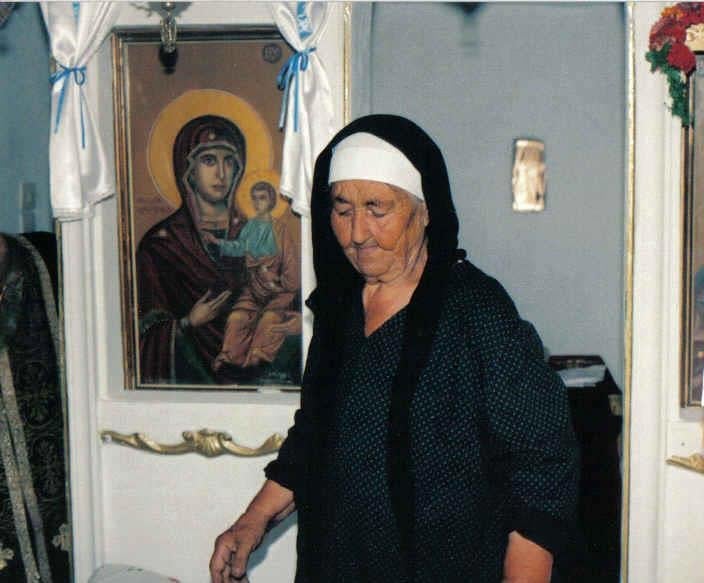 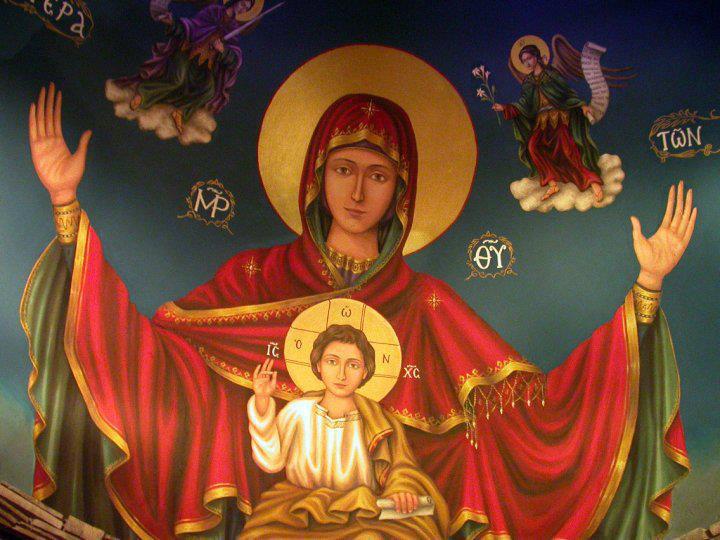 Our Blessed Virgin Mary possessed piety, humility and holiness in abundance to become the Mother of Jesus Christ.
As a role model, she teaches us the importance of trusting God despite the many trials she faced throughout her life.
God chose Mary, a young Jewish girl from Nazareth in the region of Galilee to give Birth to the King of Kings in a humble stable in Bethlehem.
God delivered His Message through His Archangel Gabriel who greeted her with the words "Rejoice O Blessed One, the Lord is with Thee! Blessed are Thou amongst women"!
Mary answered, "Let it be according to the Will of God".
Jesus came into this world in humility, simplicity and in poverty.
Angels proclaimed the joyous Birth of Jesus to shepherds keeping watch over their flock that first Christmas Eve.
“The glory of the Lord shone round about them and said unto them, Fear not: for, behold, I bring you good tidings of great joy, which shall be to all people. For unto you is born this day in the city of David a Savior, which is Christ the Lord".
(Luke 2:10, 11)
Joseph, a humble man, was the earthly step-father of Jesus who trained Him in his trade, as that of a carpenter. 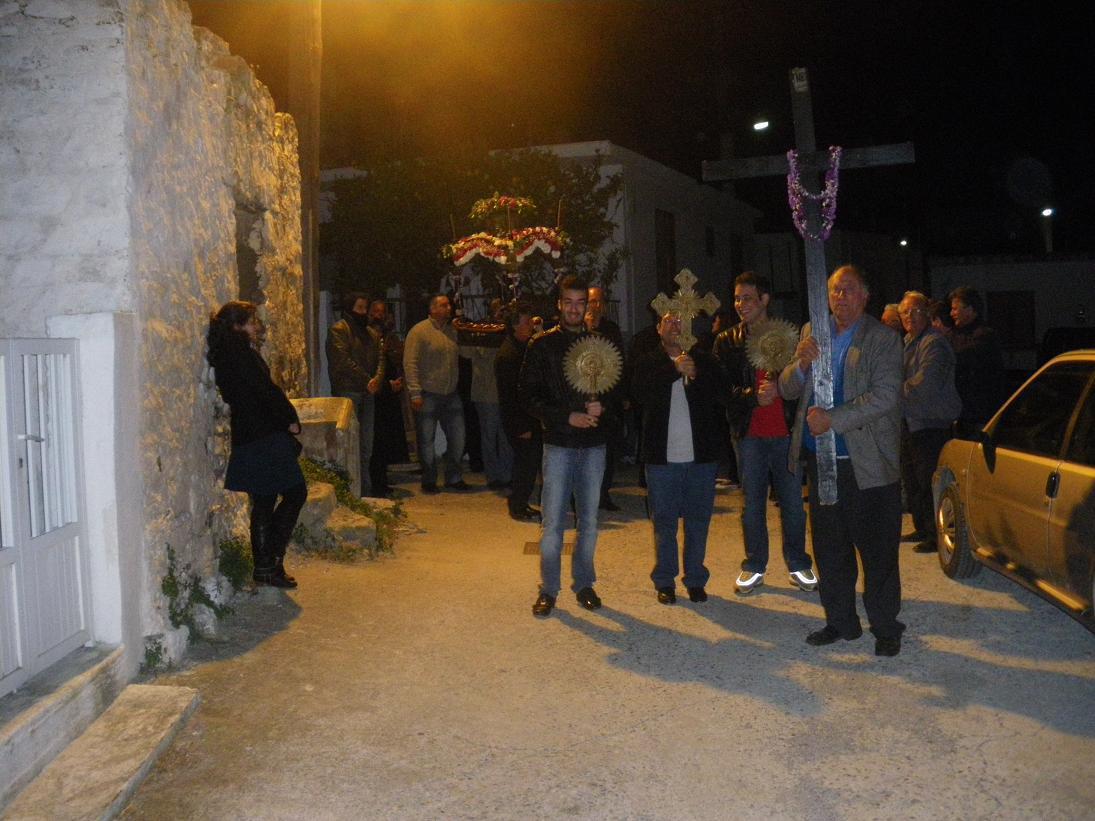 It’s hard to imagine the grief our Blessed Virgin Mary must have felt having to watch her Son being whipped and beaten by the Roman soldiers who placed a Crown Of Thorns on His Head and mocked Him, "Hail, king of the Jews!"
She watched Her Son carry His own Cross and saw the nails being hammered into Him.
She saw Him hanging and bleeding on the Cross and watched Him Die a slow and painful Death.
Despite all this, Mary never lost her trust in God.
Three important women who witnessed and wept at the Crucifixion of Christ were:
Mary, the mother of Jesus.
Mary Magdalene who witnessed the Crucifixion and Burial of Jesus and, was the first person to see Him after the Resurrection.
Salome was the mother of James and John, two of Jesus’ disciples. 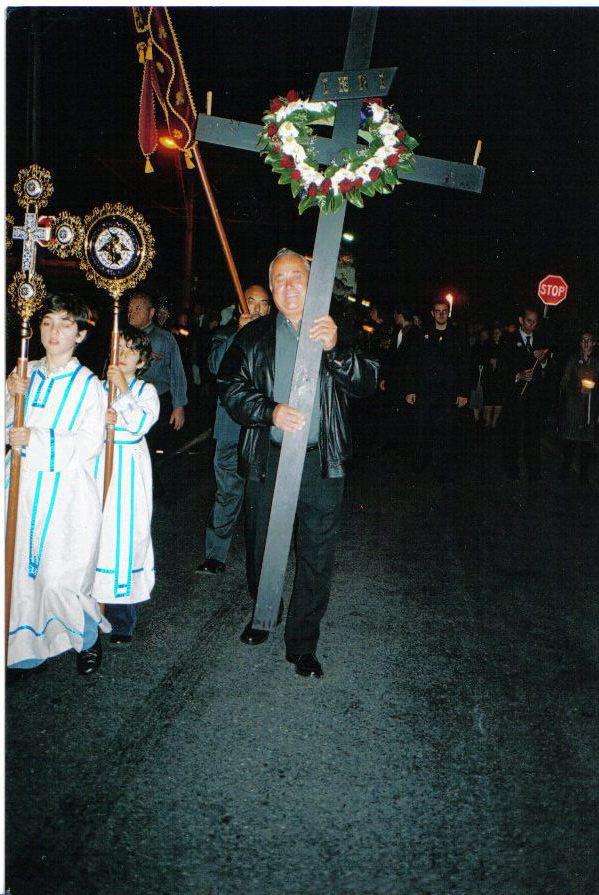 Mary Magdalene followed Jesus.
She was present at His Crucifixion and Burial and was the one who went to the Tomb on Easter Sunday to Anoint His Body.
She was the first, to see the Risen Lord, and to announce His Resurrection to the Apostles.

In Holy Scripture, St. John the Evangelist is referred to as the disciple whom Jesus loved the most.
He was the disciple who leaned on Jesus Christ's Breast at the Last Supper and who received His last request entrusting him the care of His mother as He was Dying on the Cross.
Jesus said to His Mother, "Woman behold your son!"
To His disciple, John, He said, Behold your mother!"
From that moment, John the Evangelist became her guardian.
It was at St. John's house that the Dormition (Assumption) of the Theotokos occurred.
And, St. John was the only Apostle who was not martyred and was the last to die.

Dormition of the Theotokos

(Assumption of our Blessed Virgin Mary)
Hyppolitus of Thebes (city in Boeotia, Central Greece) was a Byzantine author who states in his Chronicle that Mary died eight years after the Resurrection, in 41 AD.
The Theotokos had a natural death and her body was taken by the disciples and laid in a tomb near the Garden of Gethsemane.
At the moment of her Dormition (Falling Asleep), Jesus Christ descended and carried her body and soul into Heaven.
In the Christian West, this is known as the Assumption of the Virgin Mary.
In the East, it is known as the Koimisis or Dormition (Falling Asleep) of the Mother of our Lord.
Her body was taken to a tomb in the Kidron Valley, at the foot of the Mount of Olives in Jerusalem.
Her tomb was found empty on the third day filled with the fragrance of flowers.
The Church of the Holy Sepulchre which now stands there was built by Constantine the Great in 335 AD.
Constantine the Great and his mother, Helene are venerated as Saints by the Orthodox Church.
Their Feast Day is May 21.

August 15 - Feast of the Dormition of the Theotokos 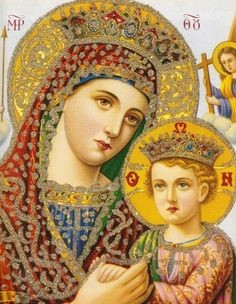 August 15 is one of the most important dates of the Greek Orthodox Calendar.
It is the Feast of the Dormition of the Theotokos and is celebrated as a national and religious holiday that marks the “Falling Asleep” or Koimisis of the Panayia, mother of Jesus Christ.
The Orthodox Church began to commemorate the Koimisis or Dormition (Falling Asleep) of the Theotokos on August 15, from the 6th century AD.
Her Feast is preceded by a two week fast from red meat and meat products, poultry, dairy products (eggs and milk products), fish, oil and wine before the Orthodox faithful go to church for holy communion.
Holy Communion is at the center of Greek Orthodox Christian life because the faithful receive the Body and Blood of Jesus Christ as He instructed during the Last Supper. 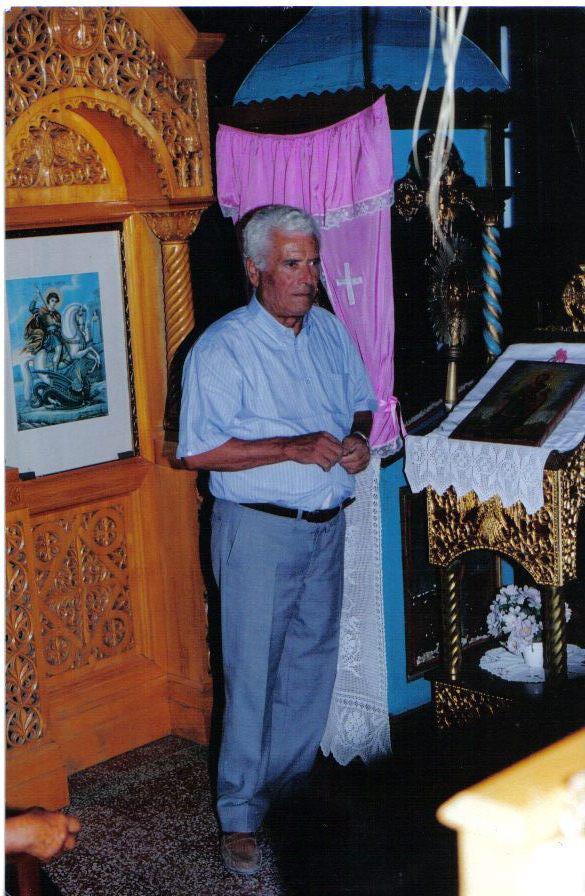 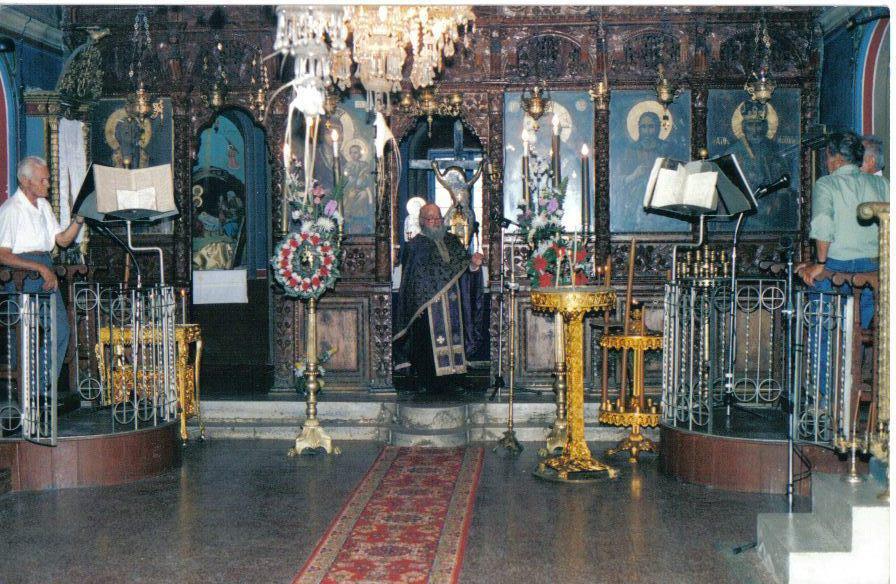 The Greek word “Orthodox” means “right belief".
It became the name applied to the Orthodox Christian Church that grew and flourished in the eastern, predominantly Greek-speaking regions of the late Roman Empire.
Orthodox icons are a "window to heaven.
They help the faithful to see with spiritual eyes of faith beyond the horizons of this world.
On the dome of all Orthodox churches is painted the image of Christ Pantocrator (Χριστὸς Παντοκράτωρ) which depicts Jesus as the Sovereign Ruler of the world.
The iconostasis (Greek: εἰκονοστάσιον) of all Orthodox churches is the most important architectural feature depicting icons and religious paintings of the people and events from the Holy Bible.
Orthodox Christian art developed in the 4th century AD in the Byzantine, Christian capital of Constantinople.
On the right of the iconostasis there will always be an icon of Jesus Christ.
On the left there will always be an icon of the Theotokos.
Next to Jesus, you will always see an icon of St. John the Baptist.
Next to the Theotokos, you will see an icon of the Patron Saint of the Orthodox Church.
Icons link Orthodox Christians to the Divine and spiritually help them grow even closer to the beauty that can only be found in God, our dear Lord, Jesus Christ, our Blessed Virgin Mary, the Saints, Prophets and the Angels. 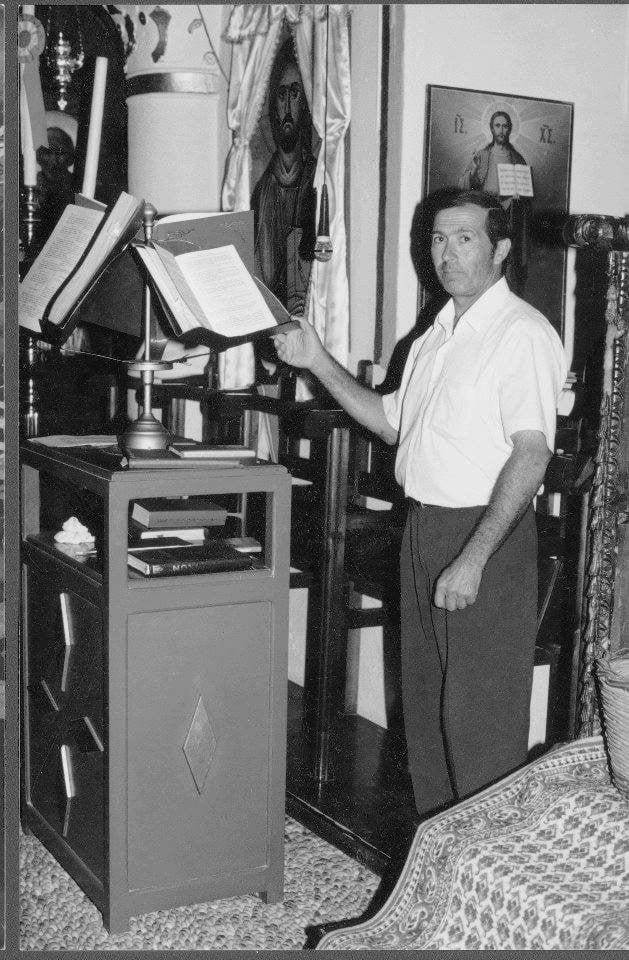 Chanting the enduring and timeless liturgical hymns to the Glory of God. 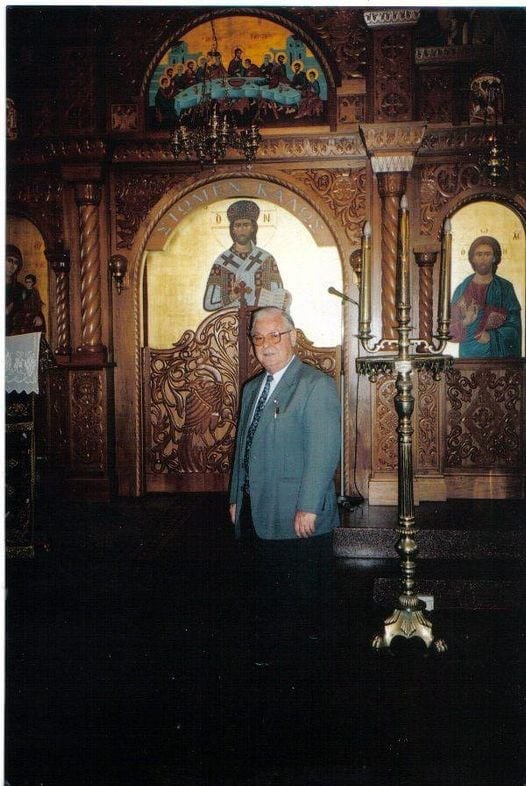 Jesus Christ is the Good Shepherd Who calls people to share in His Mission to shepherd God's flock.
He endowed His Twelve Apostles with His Divine Message to preach and baptize people into the new Christian faith where love, justice and peace prevailed so that people might live life abundantly.
http://www.efoodtours.com/the-good-shepherd.html?unique=16525790986977642